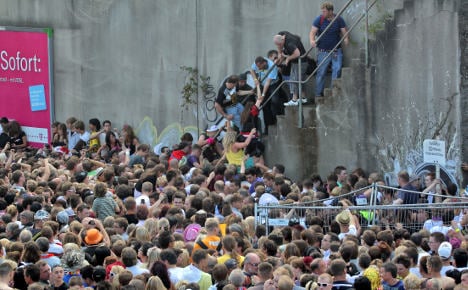 Twenty one people lost their lives at the Love Parade in 2010. Photo: DPA

Five years ago on Friday an abandoned freight station in the industrial city of Duisburg in western Germany was the scene of one of the worst tragedies in modern German history.

The city was hosting the Love Parade, an idealistic techno party which had swollen from its humble Berlin origins into one of the largest music festivals in the world.

But the 2010 festival was only a parade in name. The enclosed station was to act as a bulwark against which a mass of revelers was to strain, unable to escape.

The result was 21 deaths, mostly through suffocation, while 500 more were left seriously injured.

Families of the victims are still waiting for adequate answers as to why it happened and who was responsible.

“You couldn't turn back”

The chilling memories of festival-goers echoed across the web on the fifth-year anniversary in 2015, as actors Mara Widmann und Leon Pfannenmüller read out witness statements for the Süddeutscher Zeitung.

One visitor experienced the “pushing and jostling” as soon as they reached the first barriers in the train station.

“You couldn't turn back,” she said.

From the entrance gates, visitors entered a 240-metre tunnel, which then opened onto a large ramp.

This was supposed to be the only main entrance and exit point to the site – but by around 4pm, it became clear to festival-goers emerging onto the ramp that something wasn't right.

The 2010 Love Parade had come a long way since its birth over two decades earlier.

The techno dance festival launched in Berlin in 1989 as a birthday party for founder Matthias Roeingh. The early days: The Love Parade in Berlin in 1996. Photo: DPA

The premise? To use love and music to promote liberation, peace and international understanding.

The annual parade grew in popularity throughout the nineties, and became a symbol for Berlin's acceptance of free love and self-expression.

Yet the growth became too much for Roeingh – who stepped down as organizer in 2006 because of the “commercialization” of the event.

And as the Love Parade's fame increased year-on-year, so did its criticism.

Vets at the Berlin Zoo also blamed the parade's bass systems for giving over half of the zoo's animals diarrhea.

While the Love Parade always remained largely peaceful, with relatively few arrests, critics have argued that it was the negligence of the organizers that led to the tragedy of 2010.

As party-goers squeezed onto the ever-more-crowded ramp at around 4pm, they could already see people scaling the lighting towers, desperate to escape the crush.

With confusion mounting, people began fighting their way to the stairs leading out of the ramp area. Others tried to continue up the ramp – but found their way blocked by a string of police officers.

The festival site had become dangerously overcrowded, and by 5pm police gave orders to prevent any more people from getting in.

Visitors were unable to move forwards – but with hundreds still flooding out from the tunnel, they couldn't go back to the train station either. The ramp became a bottleneck.

“The crowd seemed to have doubled in the space of a few seconds,” one festival-goer remembered. “Then the first people began to scream.”

Overwhelmed by the heat and pressure, festival-goers – many intoxicated and dehydrated – began to fall to the ground.

Panic soon turned to violence, with people pushing others to the ground and climbing over them in an attempt to save themselves.

“It was just horrible,” one witness said. “You could see the police, but nothing was happening. It was as if they didn't understand what was going on.”

Another witness described the “horror” of finding himself next to a dead body.

“Before we'd fallen over, she'd been standing next to me. She had dark, curly hair.”

The end of the Love Parade

Of the 21 people who lost their lives, 15 were killed at the scene, while a further six died later in hospital due to injuries sustained in the crush.

Yet while visitors were dying at the festival entrance, within the site party-goers continued to dance unaware of what was going on.

Police decided not to immediately close down the event, fearing that doing so would trigger further panic.

However, festival-goers soon became alerted to what had happened at the site entrance – and by 7pm, the party began to die down.

As the number of confirmed dead rose throughout the night, the scale of the tragedy became clear – and the next day, organizer Rainer Schaller announced that out of respect for those killed, there would never be another Love Parade in Germany.

Who was to blame?

In the wake of the tragedy, thoughts quickly turned to what had gone wrong.

How could something this tragic happen at such a well-known, supposedly well-organized event?

Schaller immediately blamed the police, claiming that mistakes in crowd control had ultimately led to this disaster.

But the state interior minister rejected this claim, laying the blame squarely at Schaller and his company Lopavent's door.

The company's security concept had simply not been up to scratch, said the interior ministry. Families are still waiting for the case to come to trial. Photo: DPA

Duisburg Mayor Adolf Sauerland also came under fire from protesters who claimed he had known that security provisions were sub-standard, but had allowed the event to go ahead anyway. Hundreds rallied at the city hall demanding his resignation.

It took four years before anyone was charged in relation to the tragedy, but families are still waiting for the case to reach court.

In February 2014, six Duisburg public servants and four Lopavent employees were charged with involuntary manslaughter and bodily injury due to negligence.

Both Schaller and Sauerland were exonerated. Prosecutors stated that both men were “entitled to be confident that the persons who were responsible for the planning and approval would duly check the project on the basis of their expertise”.

The Duisburg tragedy marked the end of Germany's Love Parade – and with it, the sense of liberation, free love and peaceful rebellion that the festival had evoked.

In 2015, the “Zug der Liebe” – or “Train of Love” – will move through the city's Friedrichshain district, and its aim is simple: to unite people through music, love and community. It continued every year, but won't take place in 2020 due to the coronavirus pandemic, said event organisers.

Yet despite the motto: “onto the streets for love,” organizers are at pains to stress that this is a completely separate event.

“We're not the new Love Parade, and we don’t want to be,” organizer Jens Schwan told The Local shortly after the founding in 2015.

The parade came about after organizers became frustrated with current issues facing Germany – such as refugee policies, PEGIDA demonstrations and anti-refugee protests in Freital, Schwan said.

He also emphasized the security precautions they have taken.

“We've had three meetings with police here in Berlin,” Schwan told The Local. “We've taken on board every suggestion from the police.”

“There are no narrow passageways, tunnels or anything like that,” he explained, adding that alternative routes have been planned in case numbers are larger than expected.

For the survivors of the Duisburg crush, the memories still remain.

One visitor, who fell on top of a young man, remembers regaining consciousness.

“I turned around and started shaking him,” he said. “His face was already tinged with blue. I knew he was dead. I see his face every day, even now.”

“I feel empty,” another said. “We all headed out in such a good mood that day. We wanted to have fun. How did this happen?”

In April 2020, the long-running trial ended without a verdict. The court argued that, with so many defendents, the invidual levels of guilt were difficult to assess.

Reporting by Hannah Butler and updated on July 24th, 2020.