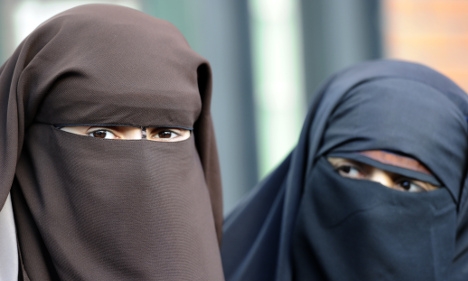 Tourists in Annecy have been told that France banned veils back in 2011. Photo: AFP
The picturesque town of Annecy, in south eastern France, is described in tourist brochures as the Venice of the Alps, and it draws in tourists from all over the Alps region, especially from Switzerland.
However, locals in the idyllic tourist hotspot complained to authorities last summer that some of these tourists were wearing full face veils —known as burqas or niqab — which are legal in Switzerland but were controversially banned from all public places in France in 2011.
Annecy police have now taken action to let  tourists know that they are breaking the law with their religious headwear, handing out flyers in both English and French to those seen wearing veils in an effort to alert them to the fact that they are in breach of the French law. Beautiful Annecy, the self-described Venice of the Alps. Photo: AFP
While burqa-clad people face a €150 ($165) fine, police are yet to hand out anything more than a reminder, reported Swiss newspaper Le Temps.
Police commissioner Alain Favre said that the move was focused on public safety.
“This isn't a question of stigmatizing or 'burqa hunting', rather about informing people that French law prohibits people from concealing their faces for reasons of safety. We have to be able to identify any one person,” he told the paper.
Officers have been advised not to give out fines, rather to discuss the matter with the tourists and to ask them to show their face privately.
Since its inception in 2011, the so-called burqa ban increased tensions with France's Muslim community, which at an estimated five million is western Europe's largest Muslim minority.
Many Muslims view France, which is officially a secular republic despite being overwhelmingly Catholic, as imposing its values on them and other religious minorities.
In January, Switzerland's Ergerkingen Committee, linked to the right-wing Swiss People’s Party, announced it was seeking a national law to prohibit the wearing of veils and other face-covering headgear.
Although the burqa (full veil) and niqab (face veil), both Islamic forms of head dress, were not specifically mentioned, the initiative would ban the wearing in public places of any kind of clothing hiding the face.
Url copied to clipboard!