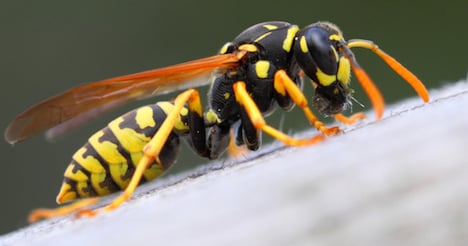 The weather conditions also mean that wasps are more advanced with their nest building than usual for the time of year.

Last year was cooler and wetter than last year, and wasps were less of a problem.

She also reported that “nests are growing at an alarming rate”.

Andy Probst of the Desinfecta company echoed this: “The nests are already as big as they are usually in August or September,“ Probst said, explaining the increase in call-outs.

In the regions of Lucerne and Basel the company had one person doing nothing all day but clear nests, he said.

The Insekta Schädlingstechnik firm with branches in Bern, Zurich and Aargau said its teams were being constantly deployed.

“There is great demand at the moment; we’re removing about 15 nests a day,” an employee told the paper.

Egli said that at the moment wasps were finding enough to eat, and were not bothering people too much but she added: “they will soon become aggressive when their food supplies are exhausted”.

She recommends keeping food and soft drinks covered, and checking the fork before raising it to your mouth.