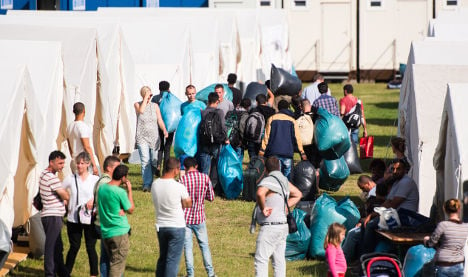 Migrants at a refugee facility in Hamburg. Photo: DPA.

Migration ministers from all 28 EU member states met on Monday in an attempt to finalize European Commission plans to resettle 40,000 refugees based in Italy and Greece and another 20,000 asylum seekers from outside of Europe.

But some countries did not agree to take in as many refugees as the European Commission had proposed. Denmark said it would not take in any of the 40,000 migrants in Italy and Greece while Spain pledged to take far fewer asylum seekers than what the commission had planned.

This left leaders short of the goal of relocating 40,000 Mediterranean migrants with the combined total pledges reaching 32,256 people.

Germany pledged to bring in more than 10,000 people from Italy and Greece, one of the highest numbers.

Still, the leaders managed to go above and beyond meeting another goal. They had planned to relocate another 20,000 immigrants from non-EU refugee camps and at the meeting pledged to redistribute 22,504.

Germany said it would shelter 1,600 of this group, bringing the country’s total to 12,100 refugees.

France and Germany had recently made a pact to take in 21,000 refugees between the two countries – more than a third of the EU-wide goal of 60,000.

The quota system had been pushed by Chancellor Angela Merkel after the German government had become increasingly frustrated by the large number of asylum applications it has coped with since unrest swept the Middle East in the wake of the Arab Spring.

The proposals also come as a reaction to the high death toll on the Mediterranean Sea as an estimated 1,800 refugees have lost their lives trying to cross into southern Europe this year.

The project has gained the support of southern European states, but has been furiously opposed by the United Kingdom and certain eastern European countries.