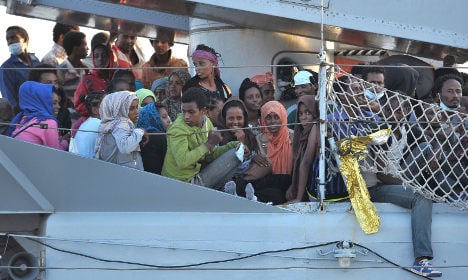 Migration ministers from all 28 EU member states met on Monday in an attempt to finalize European Commission plans to resettle 40,000 refugees based in Italy and Greece and another 20,000 asylum seekers from outside of Europe.

“All EU member states have to be prepared to take their responsibility. This is the worst humanitarian crisis in our time,” Sweden's migration minister Morgan Johansson told reporters when he arrived in Brussels.

But after several hours of talks, the European Commission's plan to ask all EU member states to take in a proportion of the refugees remained in limbo as some nations asked for more time before committing to a set quota.

Sweden, which already accepts the most asylum seekers per capita in the EU, offered ahead of the meeting to relocate just over 1,800 migrants as part of the scheme. Germany, which takes the greatest number of refugees in real terms, has signed up to 12,000.

The Nordic country had advocated mandatory quotas, which would have seen countries allocated a set of asylum seekers based on their population size, economic growth and former engagement with refugees.

But after several states voiced concerns about the strategy, including Hungary, Slovakia, Spain and Estonia, EU leaders agreed to make the quotas voluntary. The UK has chosen to avoid the plans entirely due to an existing EU agreement which allows it to ‘opt out’ of some issues.

“In some member states there are extreme right-wing forces that push for an end to all commitments,” said Johansson ahead of the talks.

“It's about creating a new order in Europe where you can't just assume that only some countries will take their responsibility,” he added.

It is estimated that more than 1,800 migrants have died so far in 2015 while making their way to Europe from war-torn nations such as Syria, Iraq and Libya, in packed boats travelling in dangerous conditions.

Sweden's foreign minister, Margot Wallström, recently told The Local: “What if we lived in a war zone? We would also want to flee somewhere safe with our children, or try to secure a future elsewhere. It has to do with whether or not we are serious in the EU about our guiding principles – this will affect our credibility.”

But Sweden's open borders have been strongly criticised by opposition groups in recent months. The nationalist Sweden Democrats – backed by 12.9 percent of voters in the last general election – want the Nordic nation to limit immigration and several centre-right parties have mooted the idea of giving refugees temporary rather than permanent residency permits.