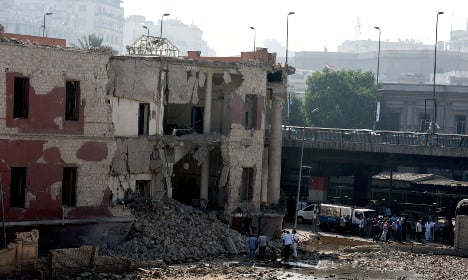 One person was killed in a powerful explosion that severely damaged the Italian consulate in central Cairo. Photo: Mohamed El-Shahed / AFP

His statement came after a medic told an AFP journalist at the scene of the blast that it had wounded two policemen and three passers-by, but Abdel Ghaffar was unable to specify if the dead person was a member of the security forces or the public.

Egypt's official Mena news agency said that early indications were that the explosion was caused by a bomb that had been planted in a car parked near the consulate.

Hundreds of soldiers and policemen have been killed in militant attacks in Egypt since the army deposed Islamist president Mohamed Morsi in July 2013.

Over the same period, at least 1,400 people, mostly Islamists, have been killed in a security crackdown on protests.

The deadliest attacks against the security forces have occurred in the Sinai Peninsula, most of them claimed by the Islamic State jihadist group.

But Cairo and cities and towns in the Nile Delta have also been targeted in such attacks, which have left hundreds of soldiers and police dead.