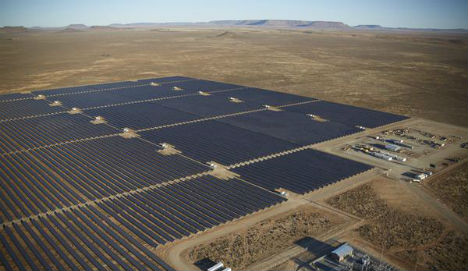 Scatec's Dreunberg plant in South Africa. Photo: Scatec
The Oslo-based company said it planned to build the plant in the  city of Segou in the south west of Mali and run it for 25 years.
“This landmark agreement signals the government's commitment to meet the nation's growing energy demand and to provide clean, renewable and affordable energy to our people,” energy minister Mamadou Frankaly Keita was quoted as saying.
The plant is expected to produce enough electricity each year to power 60,000 typical family homes, while cutting annual carbon dioxide emissions by about 46,000 tonnes.
Mali, a volatile, conflict-hit country of over 16 million people, has been plagued in recent years by chronic electricity outages.
The government reported last year that the country, which is almost two-thirds desert, had managed to supply just 45 percent of its electricity demand in 2013.
The administration in Bamako says Mali's EDM-SA energy company — two-thirds owned by the state and a third owned by a subsidiary of the Aga Khan group — is in crisis, failing to ensure an adequate supply despite state
subsidies worth 87.7 million euros in 2013.
“After several years of development efforts in the region, we can now move forward with the first utility-scale solar plant in west Africa,” Scatec Solar CEO Raymond Carlsen said.
“The Malian authorities have demonstrated decisive will to tackle the nagging issue of power supply.”
Scatec will own 50 percent of the Segou plant while the World Bank's International Finance Corporation will hold 32.5 percent, leaving the remaining equity to local partner Africa Power 1.
The project is to be funded by a combination of traditional bank borrowing, a loan from the World Bank's Investment Climate Fund and equity contributed by the partners.