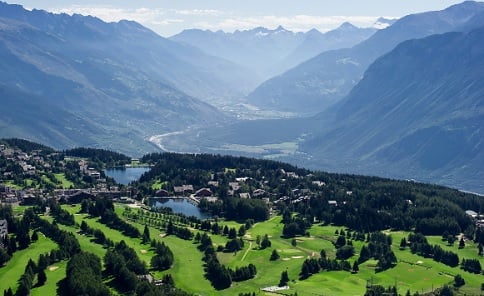 Where can you find beach volleyball, skiing, horseback riding, downhill mountain biking, gastronomy, world-class shopping, and a top-notch international school all in one?

From September 2015, the answer will be clear: Crans-Montana, Switzerland.

Crans-Montana has long been known for its skiing, golf, stunning nature, and the Caprices festival. Sophia Loren and Roger Moore are among the many famous residents. It’s an unbeatable place for a holiday – but with a cutting-edge school opening this autumn, it may now be an even better home.

“We are opening the doors to Le Régent Crans -Montana College on September 14th,” Head Master Didier Boutroux told The Local. “And we’ve already had excellent feedback from the parents who have visited our campus.”

The brand new school, which is opening this year for pupils aged 5 to 13 and will welcome students aged 14 and up in 2016 , describes itself as an independent British international boarding and day school on the Haut Plateau.

“We are a British International School, British in our syllabus and international in the making of the teacher and student bodies,” Boutroux said. ”All teachers, except those teaching languages, are from the United Kingdom, while our registered students come from the Haut Plateau, Italy, France, the UK, Ireland, Germany, the Netherlands, Russia, Canada, Pakistan and China.” English is the working language, but the school will offer French and Mandarin at an early stage. German and Italian will also be available.

“And of course all classes are given by native speakers,” added Boutroux. “If there’s a demand for other languages in the two years of the IB programme, we will certainly entertain the idea of offering them.”

The school adds further value to an area already overflowing with opportunity. The area already has a tradition of top-notch education through Les Roches International School of Hotel Management – and now it will be even stronger.

“In Crans-Montana we don’t have just one ‘best thing’,” Christine Schmidt, communications manager for the local tourist agency, remarked. “We have everything. We have very high quality of life with fresh, pure air, the mountains, and an amazing panorama all in one.”

Boutroux agreed, and added that the school will make it easier for visitors to become true residents.

“Crans-Montana is a very international resort and there has always been a silent demand for secondary education in English leading to the International Baccalaureate. Our college is filling this gap.”

Le Regent Crans-Montana College will host up to 350 students, two-thirds of which will be boarders and the remaining third as day-students. But regardless of whether students live on-campus or off, the school aims to make it feel like home.

“We nurture a very strong family atmosphere,” Boutroux pointed out. “We have very small classes, just about ten students, and we focus on the individual and on developing their hidden talents.”

The Expat Project: How to move to Switzerland

Students at the school will sit the IB exam and teaching is rigorous, but the Head Master noted it’s also important to focus on other values. The school’s philosophy rests on four pillars: Courtesy, Compassion, Creativity, and Courage.

“Courtesy, a too often forgotten virtue, is based on respect for oneself and for others, their beliefs, cultures and personality,” he explained.

“Compassion fosters empathy and humility. Creativity enables people to challenge old paradigms and open their minds to new perspectives. Courage helps us overcome our own limits, take leaps of faith, and bring about change.”

“These school principles permeate all our actions from the boardroom to the classroom because we want to produce well-rounded, internationally minded students.”

“Our school has become part and parcel of the local community, which gives the students and their parents a sense of safety and belonging, key to a happy and well-balanced life” remarks Mr Boutroux.

The school intends to take full advantage of all the facilities available in the resort.

“Parents and children alike are enthused by the school ethos, the campus, and the resort at large: its climate, the purity of the air, its excellent facilities for a wide range of sports, and the friendliness of its people.” “It’s the perfect atmosphere not just for learning, but also for living,” Christine Schmidt agreed.

This article was produced by The Local in partnership with Crans-Montana Tourism.