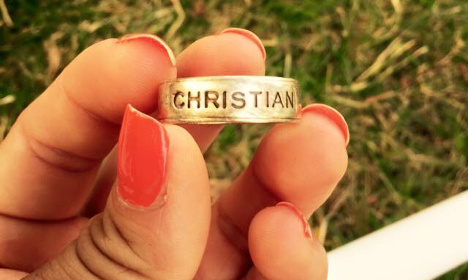 Casper Kjellström, 11, was trawling for mussels on the beach at Almenäs near Borås during the weekend's heatwave in Sweden, when he netted an unexpected treasure: a ring bearing the inscriptions “Christian” and “Annelie”.

“It was so hot that day, so the whole family had gone down to the beach. Then suddenly Casper came up from the water and was really excited,” the boy's mother Yasna Kjellström told The Local on Monday.

“But you know yourself the horrible feeling when you think you've lost your engagement ring, so when I got home I immediately started looking for the owner on social media,” she added.

Her helpful Facebook friends joined the hunt for “Christian” or “Annelie”, and with one of her posts being shared almost a thousand times, it did not take long for the ring's rightful owner to get in touch.

Christian Perez, 43, had lost the engagement band when it fell off his finger on a visit to Almenäs in central Sweden last Thursday. Despite spending almost half an hour looking, he could not find it.

“I had covered myself in sunscreen, I think that's why the ring slipped off. When I failed to catch it I searched the bottom of the sea without finding it,” he told local newspaper Borås Tidning.

“He said his wife had not been very happy he lost it. But we've been texting and he's going to come and pick it up. He was delighted and said that he had not thought people this honest existed. I just said 'of course they do',” Kjellström told The Local. And for Casper it proved to be a catch he is likely to tell people about for a very long time.

“He's really proud and thinks it's such a big deal. He believes in karma, my son – he's just 11 – and has been telling me 'when you do a good deed, mum, you get something good in return',” Kjellström laughed affectionately.

The incident has turned the young trawler into a treasure hunter, but few finds have so far measured up to the engagement ring, said Kjellström.

“No, we went back to the beach yesterday, but only got mussels!”