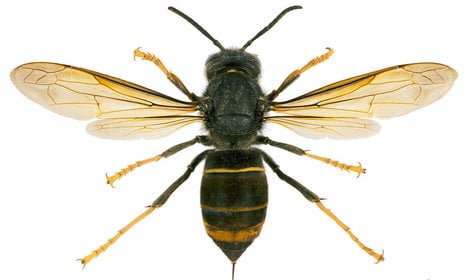 The so-called killer hornet arrived in Italy in June, creating widespread panic. But before you run for cover, we've attempted to separate fact from fiction….

What is the killer hornet?

The killer hornet is the name given to the Asian Hornet, or to give it its latin name, Vespa Velutina. Vespa Velutina is smaller and darker than the European Hornet. It  first arrived in France in 2004.

Smaller? I saw a photo on Facebook and they looked huge!

I bet you did. But amid all this hysteria people are confusing the Asian Hornet with the Giant Asian Hornet, which thankfully hasn't arrived in Europe yet.

So why are they called 'killer hornets'?

Well, since 2004 they have killed six people in France – all of whom died after having an allergic reaction to the sting.

European Hornet stings kill people who are allergic to them too. But their Asian cousins got the moniker 'killer' because they are a lot more aggressive than European Hornets and therefore more likely to sting.

So there's nothing to worry about then?

Not really – not unless you're allergic to wasps. Or if you happen to be a bee.

You see, hornets are predatory and love eating bees. Normally the Asian Hornet preys on the Eastern Honey Bee – but here in Europe it's preying on our native European Honey bee.

Unfortunately, the European Honey Bee has not had the time to evolve any defences against this new predator. This means Asian hornets can easily kill 40 bees a minute and a small group of them can decimate a hive of 30,000 honey bees in just a few hours, before scoffing the larvae inside the hive.

This is bad news for bee-keepers, and farmers who rely on bees to produce the food that they sell.

Where are the hornets?

They have been seen in the centre-north of the country and the bad tempered beasts have already stung a few civilians – without any serious consequences.

Alessandra Ripari, head of the Apocoltori Macerata bee-keepers association, told daily newspaper Il Resto del Carlino: “We know that they are widespread in Cuneo, Alessandria and Imperia, which is very dangerous for local bees.”

There have also been reports of a man being stung by a killer hornet in the southern province of Calabria – so it looks like they are on the move.

What's being done to stop them?

Boffins at the University of Turin are working on a radar to attach to the hornets so that their nests can be located and destroyed.

What should I do if stung?

If you have any kind of allergic reaction and experience breathing problems, a swollen tongue, dizziness , faintness, nausea or hives (the skin condition – don't be smart), call the emergency services immediately.

If you don't have an allergic reaction, check to see if the sting is stuck in your skin and remove by scraping it out. Don't pinch it as you might end up pumping more venom into yourself.

Ice the sting for ten minutes, which will take away the pain and itching. Symptoms might last for two-five days, so you can re-ice if need be.

Most importantly, clean the area where you were stung regularly with soap and water to avoid infection.