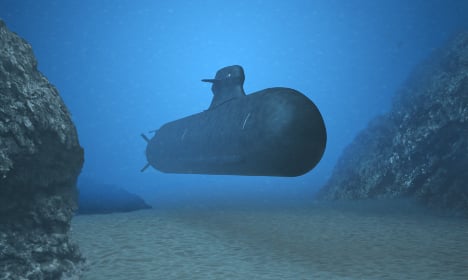 What the new submarines could look like. Photo: Saab AB

“We are of course very pleased,” Saab chief executive Håkan Buskhe told reporters at a press conference in Visby, where he is attending Sweden's politics festival Almedalen Week.

He said the order would create around one hundred jobs at the Swedish defence and security company.

“This means some hundred new employees in both Malmö and Karlskrona,” he said.

The order from the Swedish Defence Materiel Administration (FMV) covers the construction of two new Type A26 submarines, as well as a mid-life upgrade for two Gotland-class submarines.

Deliveries of the two new subs will take place in 2022 and 2024, Saab said in a statement.

Saab said the A26 was a high-tech submarine with “long-endurance submerged performance and excellent manoeuvrability in all waters”.

It added the new subs would be “highly survivable thanks to modern underwater stealth technology and a unique heritage of shock resistant design”.

In a sunny #Almedalen our CEO, Håkan Buskhe meets the press. Read the A26 release: http://t.co/vfRbhnrnle #submarines pic.twitter.com/zhzxWDIpNS

The subs will be powered by conventional diesel-electric propulsion machinery and equipped with the Kockums Stirling Air-Independent Propulsion (AIP) system, making them difficult to detect.

In April, the Swedish government announced plans to raise defence spending by 10.2 billion kronor ($1.18 billion) for 2016-2020, mostly to modernize ships to detect and intercept submarines, amid increasing Russian military activity in the Baltic Sea region.

Sweden has a long-standing tradition of military non-alliance, but support for Nato membership has increased in recent years, largely due to fears of a potentially aggressive Russia.

A major poll last month suggested that nearly one in three think Sweden should join the defence alliance.