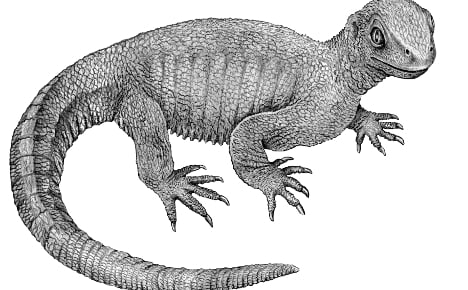 The 240 million-year-old tortoise that was dug up by scientists in Schwäbisch Hall, Baden-Württemberg, has been dubbed the “Granddad tortoise”.

But the fossil isn't just impressive for its age, because it is also the missing piece in the jigsaw puzzle of tortoise's evolutionary origins, linking them to lizards, said Rainer Schoch from the Stuttgart Natural History Museum.

“Something like this is the equivalent of winning the jackpot in the lottery,” Schoch said with triumph. It is no surprise that he is pleased, after having been digging at the site for 13 years.

The creature's anatomical make up has enabled scientists to establish a closer relationship between tortoises and lizards, crocodiles, and birds. As a result, the previous theory that tortoises originated from the very first dinosaurs has been discredited.

Before this sensational discovery, the oldest reptile with a shell was thought to be a 220 year-old tortoise, whose fossil was found in China.

With this tortoise the carapace, the top part of the shell, only consisted of protruding rib bones, but the plastron, the underside, was already shell-like.

But the difference with the Granddad tortoise is that the ribs are yet to have merged together to form a shell, which means that it actually looks more like a lizard at first glance.

This 20 cm long, lizard-like creature has managed to clear up two parts of the tortoise's evolution at once. Firstly how the underside of the shell developed, and secondly how the skull originally looked.

It is thought that the Granddad tortoise lived around fresh water lakes, and liked to spend time in the water as well. Their strongly built ribcage suggests that they could have dived deeper and for longer than lizards.

According to genetic studies further back in the evolutionary process, tortoises split from crocodiles and birds 250 million years ago.

Schoch said their findings were “of great scientific and evolutionary importance”, but the origins of tortoises are still hotly debated in scientific circles because of a lack of fossils.

Evolutionary biologist Michael Gudo, who is treasurer for the German Palaeontology Society, finds the concept of the “missing link” problematic because “any further discovery could once again throw everything back into doubt”.