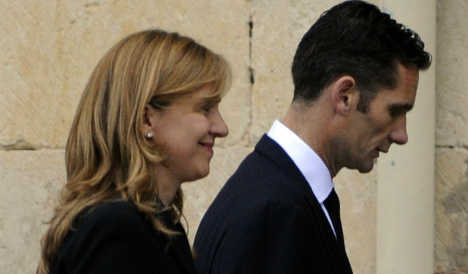 Cristina, sister of King Felipe VI, and her husband the former Olympic handball player Inaki Urdangarin, were forced to sell the house to pay a court bond for their liability in the case.

They paid a €2.4m instalment of the bond on Thursday, having raised cash by selling off the house, the court on the island of Mallorca said in a statement.

Spanish newspapers said the couple were paid €6.9m for the big modern villa with its swimming pool and 2,000 square metres (21,500 square feet) of land.

Cristina, 49, has been ordered to stand trial for allegedly taking part in tax evasion by Urdangarin. He himself is accused of embezzling €6m in public funds. The mansion is in Barcelona's upmarket district of Pedralbes Photo: Lluis Gene / AFP

They have both denied the charges.

Cristina is the first member of the Spanish royal family in modern times to be sent to the dock. No date has been set for her trial.

The scandal contributed to the abdication last year of Felipe's father Juan Carlos. Felipe marks the first anniversary of his coronation on Friday.

Juan Carlos handed over the crown in the hope his son could restore the monarchy's popularity, which plunged during the recent economic crisis.

The crown's image was damaged by the Urdangarin affair and by other scandals such as a luxury elephant-hunting trip Juan Carlos made in 2012 at the height of Spain's recession.

On June 11 Felipe announced he was stripping Cristina of her title as Duchess of Palma.