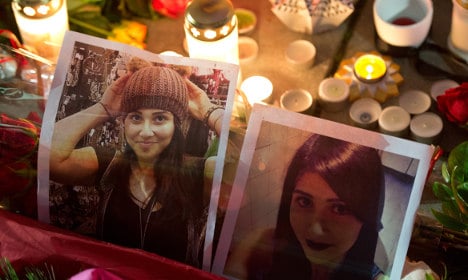 A memorial to Tugce outside the Offenbach hospital where she died. Photo: DPA

The 18-year-old M. was found guilty of gross bodily harm with fatal consequences by the judge at the state court after a ten-day trial.

M. was arrested and charged after he had hit the 23-year-old Albayrak across the head during an altercation in November 2014.

By finding M. guilty the judge agreed with the prosecution's assertion that M. knew that the actions he took could have resulted in death.

The prosecution had called for a three year and three month prison sentence while the defence argued for a one year probationary sentence.

The prosecution argued that anyone who punches another person in the head with a certain force must be aware of the potentially fatal consequences such an action could have, reports the Frankfurter Allgemeine Zeitung (FAZ).

The defence, meanwhile, countered that M. had given Albayrak an “Ohrfeige” – a cuff around the ear .

It was implausible to argue that one could foresee fatal consequences from an action that for hundreds of years was a “tried and tested parenting technique” FAZ reports the defence to have argued.

On Novermber 15 2014 Albayrak had confronted M. for harassing two young girls in a McDonalds toilets in Offenbach. She hit the ground and went into a coma after the attack, which was captured on a surveillance video and later broadcast on national media.

Days later her family switched off her life-support system on her 23rd birthday, sparking a wave of sympathy in Germany amid widespread revulsion over the attack.

About 1,000 mourners attended Albayrak's funeral and a mass online petition called for her to be posthumously awarded the Bundesverdienstkreuz (Federal Order of Merit) for her bravery.

At the time Chancellor Angela Merkel expressed support for awarding the honour to a woman called a “role model” by President Joachim Gauck for showing “bravery and civil courage in an exemplary way.”