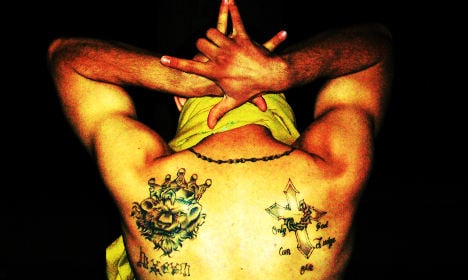 Los Mossos d'Esquadra began the operation at about 6:30am on Wednesday in the Barcelona metropolitan area to bust members of the gang dedicated to drug trafficking and extortion.

Among the 23 arrested was suspected leader King Manaba, a 35-year-old Ecuadorian man, who was found at his home in Santa Coloma de Gramenet, according to newspaper El Mundo.

The arrested face charges of organized crime membership, drug trafficking, assault and extortion.
The police force announced the arrests in a tweet, hinting that more arrests were expected:

According to newspaper El Periodico, the arrested members had been part of a state-sponsored group aimed at reintegrating and rehabilitating gang members called the Union of Cultures.
The newspaper reported that after a leader and members of another Latin Kings faction were detained last year, this government-sponsored group began to get involved in crime.

The officers have been staking out around ten different homes in the area and have reportedly found one location growing marijuana.

The Almighty Latin King and Queen Nation gang, or simply Latin Kings, began in the 1940s within Chicago's Puerto Rican community. It has since spread across North and South America and into Europe.

Last year, national police forces conducted raids on other gangs with Latin American ties, including the El Salvador-born Mara Salvatrucha, along with the Latin Kings.