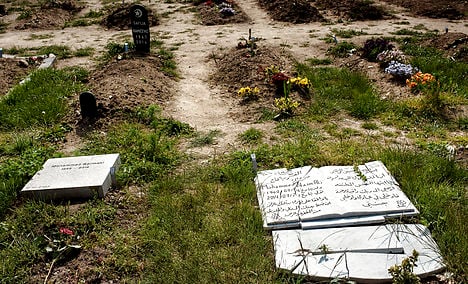 Photo: Niels Ahlmann Olesen/Scanpix
A Muslim cemetery in the western Copenhagen suburb of Brøndby was vandalized late on Friday, Copenhagen Vestegn Police confirmed to various media outlets on Saturday.
According to police spokesman Kim Madsen, some 50 graves were vandalized and numerous tombstones were destroyed and strewn over the burial grounds.
Policie initially said that they viewed the action as a likely “prank”.
“We don’t consider this to be something aimed at the Muslim community, there isn’t anything to indicate that. It looks like a prank in which someone went out there and just knocked them down,” Kim Madsen told Ekstra Bladet.
While Copenhagen Vestegn Police said they would look for witnesses that could give them more information, some politicians questioned the police reaction.
“A Muslim cemetery is vandalized but police don’t see it as politically motivated? Why?” Socialist People’s Party MP Özlem Cekic wrote on Twitter.

Social Liberal (Radikale) MP Zenia Stampe also questioned why the police weren’t taking the incident more seriously, writing on Facebook that the vandalism “comes after a period of attacks on women with head scarves, vandalism of mosques and a growing hatred of Muslims online”.
“A policeman talked about this as 'a prank'. I am very angry about the use of that word,” Stampe wrote in a comment to her own Facebook post.

Later on Saturday, police said that they were giving the desecration top priority.

“We consider this to be political-religious vandalism and we are investigating it and giving it all the attention we can. It has been given high priority and so that this doesn't develop any further, we have put patrols in place at the Muslim cemetery,” Inspector Bjarne Nisted from Copenhagen Vestegn Police told Politiken.

Nisted said that police believe that more than 50 graves were systematically destroyed and some were even urinated on. Although police no longer consider it to be just a prank, they have not yet found any definitive proof to indicate the reason behind the attack.

“We haven't found anything that indicates what kind of motive was behind it or who could be responsible for the destruction. On the other hand, it is unlikely that the location was chosen randomly and those who carried out the vandalism may have had their own crazy agenda,” Nisted told Politiken.