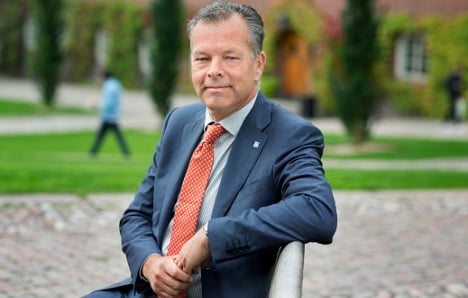 As the home of Spotify, Volvo, Minecraft and Avicii, Sweden has made quite a name for itself in the modern world.

The country consistently ranks near the top of the Global Innovation Index, and boasts some of the most innovative cities in the world.

Since an entire one-third of Sweden's university-level tech and engineering research comes from KTH (Kungliga Tekniska högskolan) – the Royal Institute of Technology – The Local asked President Peter Gudmundson for some insight.

How has Sweden, and its capital in particular, carved out such a niche?

“Everyone knows that you have to have a global outlook from the very beginning,” Gudmundson says. “It’s a mindset we have, to look outside of Sweden. Otherwise you won’t be successful.”

Indeed, the country does have a few inherent disadvantages for which to compensate.

Stockholm is located on nearly the same latitude as Anchorage, Alaska, and the average annual temperature is just 10 °C.

“We are kind of offside in a sense, far north,” Gudmundson admits. “And of course it could be a disadvantage. Companies are sometimes started here and then moved abroad.”

But despite its climate, location, and size, Stockholm is an unexpected hotbed of culture and technology – an irresistible lure for global companies.

“The success of Sweden and Swedish global companies is thanks to the fact that we are a very small country,” Gudmundson says. “We have a long tradition of global companies and everyone knows what is possible, if we only look outside.”

While larger countries may look inside themselves for resources and opportunities, Sweden’s smaller stature has led it to think outside of the box as a nation.

“In the end our size is an advantage,” Gudmundson says.

Hans Rosling: 'No such thing as Swedish values'

“It’s something we fight against by being good in other senses. Stockholm has a good name. It’s known for excellent environmental conditions, the Nobel prizes, safety… good quality of life.”

Gudmondsson adds Sweden is “global in our thinking”, both in building companies and universities.

“KTH performs well in various ranking lists with regards to research, education, and collaboration,” Gudmondsson says. “We often get high scores on staff-to-student ratios and the degree of co-publication here, which confirms our place in the world.”

But Sweden’s global future faces other challenges – much more concerning than its size, Gudmundson says. One problem can be connectivity.

“It’s a small market up north,” Gudmundson says. “If you’re in the middle of Europe you are much closer to the big markets of course, the rest of Europe, Asia, the US. We do have connections to the world, but not as frequent as cities like London.”

While a wealth of new technology – such as Skype and other internet applications now used educationally – makes tackling such issues easier.

“There is a perception that it is very far away,” Gudmundson says, pointing out that in actuality Stockholm is less than three hours from London.

“But I think there are misconceptions, like the idea that we are close neighbours with the Arctic and have polar bears walking in the streets of Stockholm,” Gudmondson remarks.

“More direct flights to Asia and long-haul flights to the US could be a good idea. Of course it could sometimes be an issue when we arrange conferences. But we manage well.”

Gudmundson notes that there has been heated discussion in the Stockholm business community to increase connectivity – but so far progress has been limited.

When it comes to flights and Sweden’s accessibility, Bromma Airport has been a particular pawn in the latest political crossfire, with the establishment bashed and advocated with equal fervor from both sides.

The new Stockholm City Council has proposed that the airport should be shut down and replaced by housing, while other parties argue that it would be a serious mistake to decommission the airport.

“It is critical for Stockholm to have good connections, I am not in favour of closing down Bromma,” Gudmundson tells The Local.

Read also: Is the world wrong to link Sweden with sexiness?

But as to Stockholm and Sweden´s place in the world, the president said he wouldn’t have his school anywhere else.

“One of our key advantages is that we have so many strong global companies close by, and strong connections to these companies,” Gudmundson explains after some thought.

“If we were to move to a more central location but not have these companies nearby…well, that would really be a great disadvantage.”

This article is the first in an ongoing series produced by The Local in partnership with ConnectSweden.