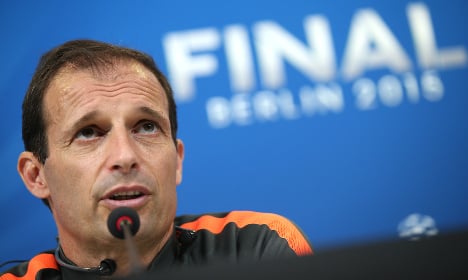 Juventus's season has gone almost to perfection under Allegri, who in his first season in charge has led the Bianconeri to a fourth consecutive scudetto and their first league and Cup double in 20 years.

But Juve's hopes of emulating the treble feat of league rivals Inter Milan, in 2010, is tempered by the fact they travel to Berlin for Saturday's finale as rank underdogs.

Between them, Uruguay international Suarez (24), Brazilian sensation Neymar (38) and Argentinian ace Messi (58) have scored a stunning 120 goals this season to help Barcelona to their own league and Cup double.

Messi, in particular, has been in scintillating form, scoring his 400th goal for the Catalan club last month, hitting the winner against Atletico Madrid that clinched the league title and scoring a stunning, individual goal in a 3-1 win over Athletic that secured the King's Cup on Saturday.

Messi's latest piece of magic did not escape Juve's players, or Allegri, who admitted: “I think what he did last Saturday was good but he's also scored better goals.”

“He's an alien,” said Juve defender Leonardo Bonucci. When he sees them play, he admits, “all you can do is applaud.”

Allegri was quick to applaud Barcelona's “character and technical nous” but said Juve won't “sit back and wait for things to happen”.

“All we need to do is play our game, play well and, above all, show that we have what it takes to challenge for the trophy,” added the coach.

“Of course, what happens during the match will condition how we approach things. But we can't sit back and wait for things to happen.

“We have to concentrate on our own roles. They (Suarez, Neymar and Messi) have scored 120 goals between them this season, but we're a great side with a lot of heart.”

A look at recent history of the sides' success in Europe's premier club competition shows why Barcelona head to the German capital as favourites.

Barcelona have been crowned kings of Europe four times, the last time in 2011 when Manchester United were on the wrong end of a 3-1 defeat that was inspired in large part by a Messi goal early in the second half.

That season, Messi scored 12 goals in the competition and the Argentinian, still only 27 years old, is still writing history.

Messi sits level top of the Champions League scoring charts with Cristiano Ronaldo on ten goals so far with both players tied on 77 career goals in the competition.

If Messi scores next Saturday, he will take the lead and also achieve the remarkable feat of scoring in all three of his final appearances with the Catalans.

Former two-time winners Juventus, meanwhile, are appearing in their first final since their 2003 defeat to AC Milan in a penalty shoot-out — the fifth time the Turin giants have failed at the final hurdle.

Bonucci, who has never come up against Messi in an official game, admits Barcelona's front men are “fearsome”. But the Italy defender, and goalkeeper Gianluigi Buffon, said they are ready.

“Obviously, they're a fearsome trio but Barca is more than just their three front men,” added Bonucci. “Everyone in their team sacrifices himself for the others. That's why, defensively, we'll have to be flawless.

“Messi is without doubt the best player in the world, for the past ten years, and when you come up against him there's always a little fear,” said Buffon.

“But I also know that we have what it takes to limit Messi, and the rest. We won't start as favourites, but we have a few things up our sleeves that won't make it easy for them.”

People march during a demonstration against the expansion of the Barcelona-El Prat airport. Photo: Pau BARRENA / AFP

Several ecological and agricultural organisations, have demanded that the expansion be stopped due to the fact nearby wetlands and farms would have to be destroyed.

The demonstration took place on Calle Tarragona in the Catalan capital between Plaça d’Espanya and Plaça dels Països Catalans.

The protests still took place, even though last week, Spain suspended the €1.7 billion airport expansion project, citing differences with the Catalan government, after president Pere Aragonès said he wanted to avoid destroying La Ricarda lagoon, a natural reserve next to the airport.

Environmentalists decided not to call off the march, in case plans for the airport expansion still went ahead.

Political representatives from ERC, En Comú Podem and the CUP also attended, as well as the leader of Más País, Íñigo Errejón; the Deputy Mayor for Ecology of the Barcelona City Council, Janet Sanz, and the Mayor of El Prat de Llobregat, Lluís Mijoler.

People from neighbourhoods across the city marched towards Calle Tarragona and could be seen holding placards that read “Nature yes, airport no and shouting slogans such as “More courgettes and fewer planes” and “Fighting for the climate, health, and life”.

One of the largest groups of people were those from El Prat de Llobregat, the municipality which is home to the airport, who were led by tractors.

People march during a demonstration against the expansion of Barcelona-El Prat airport. Photo by Pau BARRENA / AFP

In addition to protesting against the expansion of the El Prat airport, people were also demonstrating against the Winter Olympic Games in the Pyrenees and extensions to airports in Mallorca and Madrid.

A representative of Zeroport, Sara Mingorría said “We are here to defend not only La Ricarda, but the entire Delta”.

The leader of the commons in the Catalan parliament, Jéssica Albiach, who also attended the protest, asked the PSOE for “coherence”: “You cannot be passing a law against climate change and, at the same time, defend the interests of Aena [the airport operations company]”, she said.

She also urged the leader of the Generalitat, Pere Aragonès, to “definitely say no”.

If the airport expansion in Barcelona goes ahead, environmentalists say that CO2 emissions would rise by a minimum of 33 percent. These levels would surpass the limits set by the Catalan government’s climate targets.