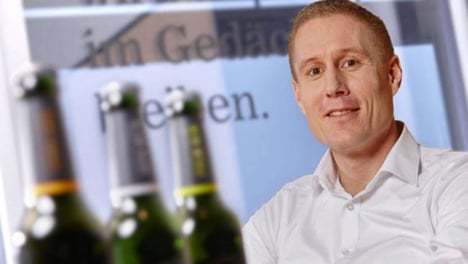 Hedrich may not have organized a piss-up at his own actual brewery to celebrate his new job, but he definitely got drunk somewhere.

In fact, in late April he got so drunk that he ended up causing a traffic accident while driving under the influence on the A95 between Munich and Garmisch-Patenkirchen, Handelsblatt reports.

The company, which produces globally-known brands such as Beck's and Hasseröder, said that it had fired Hedrich after he reported the incident himself – presumably after a long and unpleasant process of sobering up.

“It emphasises professional consequences for ignoring it. Alcohol is not a drink which has a place before driving a vehicle.

“That's why the company was shocked by Hedrich's statement, in his position he's expected to be a role model.”

Hedrich had had big ambitions for AB Inbev's German operations, telling Handelsblatt that he hoped to overtake Krombacher as the country's market-leading beer.

Now someone else will have to get in the driving seat – and take over the anti-drink driving slogans such as “Enjoy beer responsibly” and “Sort out who's driving” on AB Inbev advertising posters.

Fortunately for AB Inbev, with 25 percent of the global beer market and a 2014 revenue of more than $47 billion (€42.6 billion), the company should have no shortage of applicants.