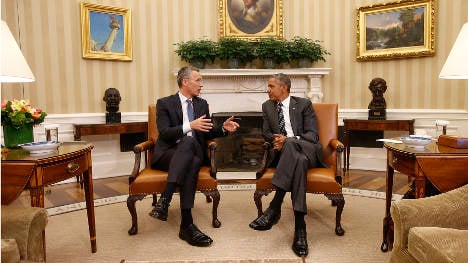 Secretary General Jens Stoltenberg in conversation with US President Barack Obama in the Oval Office in the White House in Washington Tuesday. Photo: Cornelius Poppe / NTB scanpix
After the meeting, the former Norwegian prime minister praised Obama for being prepared to “show leadership at a time where we really need US leadership”.
He also praised the US’s European Reassurance Initiative, which has boosted US military presence in European countries on eastern fringes of Nato.
Obama said that he believed Stoltenberg was the right person to steer the alliance through the new security risks.
“This is a challenging and important time for NATO, and we are very lucky to have Secretary General Stoltenberg at the helm,” he said.
Obama commended European Nato members for the steps they are taking to halt and even reverse the recent reduction of defence budgets.
“As the strongest alliance in the history of the world, we need to make sure that each member country is properly resourcing and committing to the NATO missions that have been set forth,” he said.
“That’s the only way that we’re going to maintain the kind of collective self-defence that has been the hallmark of peace and prosperity for many, many decades now.”
Stoltenberg took over the reins of Nato on 1 October 2014, eight months after being selected as successor to former Danish prime minister Anders Fogh Rasmussen.
He spent a total of nine years as Norway’s Prime Minister before being ousted in the 2013 general election.
In their meeting, they spoke about the situation in the Ukraine and the importance of the Minsk Protocol agreed with Russia and Ukraine last September to establishing peace.
Stoltenberg named the joint task force being developed by European Nato members, and the new command-and-control units being set up in the eastern European Nato countries, as some of the key recent developments made to meet the security threat from a newly aggressive Russia.
In his statement, Obama stressed the importance of the alliance in Afghanistan and in what he called the “southern front”, stressing that alliance countries needed to work both on helping the Iraqi government in its fight against IS and in helping to bring Libya under control, by providing support to the Iraqi government, Gulf Cooperation Council countries and the African Union.
Url copied to clipboard!