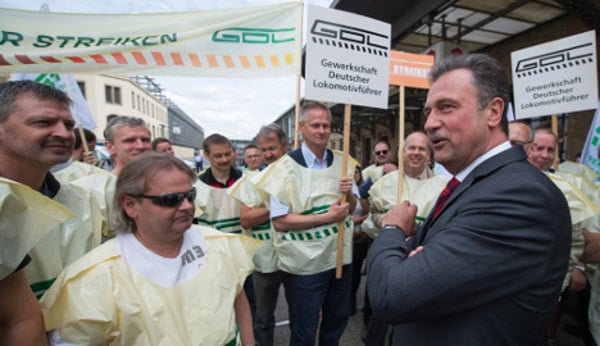 GDL leader Claus Weselsky with striking train drivers. Photo: DPA
Ulrich Homburg, DB chair of passenger services, announced that the replacement timetable for long-distance services has already been published on the DB website.
Around a third of long distance trains are predicted to run as normal.
Regional services will be affected with varying severity, with only 20 percent thought to be unaffected in the east, but more than half to continue in the west.
DB human resources chief Ulrich Weberhad  told broadcaster ARD on Tuesday morning that he would be “sitting around a table” for a final attempt at avoiding the strike from 11 am.

The state-owned company had even brought in a prominent labour law expert to advise them in the talks, he added.

But Weber's uncertainty about whether anything could avoid a further days-long strike to top the previous seven-day walkout that ended on May 10th was confirmed when the talks proved fruitless.

GDL has called on members to leave the cabins of freight trains on Tuesday at 3 pm and passenger services on Wednesday at 2 am.

The union says it will only publicise the end time of the strike 48 hours in advance, but comments from leader Claus Weselsky and leaks from within the union suggest it could last up to 10 days.

That would hit traffic over the coming weekend, which traditionally sees high demand on the rails due to the Pentecost public holiday on Monday.