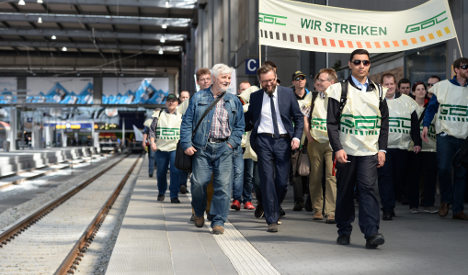 GDL members in Munich station on May 7th 2015. Photo: DPA

Union representatives said the end of the strike would be announced 48 hours before it happened.

Drivers will leave the cabins of goods trains at 3 pm on Tuesday and passenger locomotives at 2 am on Wednesday.

The strike is the ninth walkout in a three-way battle over pay, working hours, and which union represents which workers between GDL, DB and larger rival union EVG.

The last strike only ended on May 10th after a week, making it the longest such industrial action in the 21-year history of DB.

At the weekend, Train Drivers' Union (GDL) head Claus Weselsky had accused DB of breaking off talks over the union's demands on Saturday evening.

Weselsky accused the train operator of squandering the latest chance to reach intermediary agreements and for long-term reconciliation.

DB, meanwhile, accused GDL of not turning up for an agreed meeting on Sunday.

Transport minister Alexander Dobrindt called on Monday for the GDL to stay at the negotiating table rather than embark on a new round of strikes.

Speaking to Bild, Dobrindt said “responsible partnership between union and employer means one is duty bound to seek compromise. That can only happen at the negotiating table.”

One week ago the GDL brought to an end a seven-day strike on public transport, the longest train strike in the history of the Federal Republic and their

The negotiations over wage increases for train drivers have been complicated by the fact that another union, the Railways and Transport Union (EVG), has members from the same profession.

DB is trying to negotiate comparable contracts for members of both unions.

The EVG has also recently threatened the rail operator with strikes.