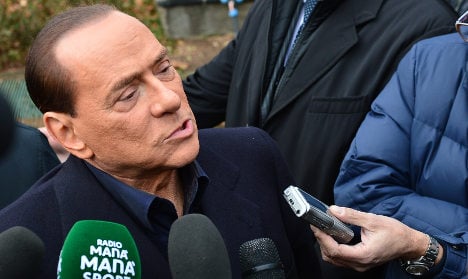 AC Milan owner and president Silvio Berlusconi has admitted he has no "desire" or "need" to sell AC Milan. Photo: Giuseppe Cacace/AFP

Berlusconi admitted in an interview with La Gazzetta dello Sport on Saturday he has been in talks with Chinese Head of State Xi Jinping about possible investment from the country in the seven-time European champions.

But two weeks after it was announced a majority stake in the club would soon be sold to Thai businessman Bee Taechaubol, Berlusconi continues to keep fans guessing as to his intentions for the once mighty Rossoneri.

The former two-time Italian prime minister conceded the arrival in the sport of wealthy investors from oil-producing nations such as Qatar had compounded his fight to keep Milan, one of the world's top clubs, on a level playing field with their European rivals.

But despite Milan's recent fall from grace that is likely to see them once again miss out on European football next season, his plans to sell the club he steered to unprecedented success in Europe during their 1990s heyday appear to have cooled.

“Right now I don't know how the situation could develop,” Berlusconi told the Italian sports daily when asked about recent negotiations with investors from China.

“Beyond the rapport we created in political terms, Xi (Jinping) has shown the utmost respect for Italian football.

“But let's be clear: I have no desire, intention or need to sell Milan.

“Although it is true that since the arrival of petrodollars and investors from Qatar, it has become very difficult for family-run clubs to support such an economic burden.”

A fortnight ago Berlusconi was said to be on the verge of selling a 51 percent stake in the club to Bee, the executive director of a south-east Asian private equity group, for an estimated €500 million ($550 million).

That deal appears to have been put to one side, at least temporarily, but Berlusconi hinted his search for potential partners who could bring significant investment without him being forced to give up a majority stake is still ongoing.

He added: “If my family can't resolve the club's problems on its own, then I will have to to find investors capable of contributing to the relaunch of Milan.

“If we can't find buyers, it's up to me to try and relaunch the club. If we do bring in new investors who want me to remain in my role, then I will collaborate with those who do come in to help take Milan back to the position we deserve to be in.”

Milan's city rivals Inter are already in the hands of Asian owners, Indonesian tycoon Erick Thohir having bought a 70 percent stake in the Serie A giants in November 2013.