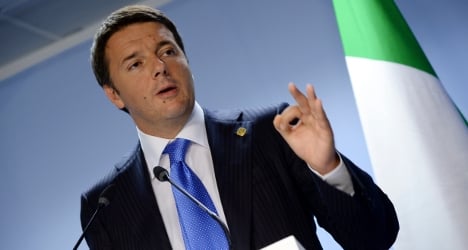 Italy's premier Matteo Renzi said "a portion" of the money owed to retirees would be paid. Photo: Thierry Charler/AFP

Earlier this month, the constitutional court overturned a key plank of the debt-laden country's pension reforms in a ruling that could require the government to repay at least €5 billion.

“We will restore a portion of this money,” Renzi was quoted by Ansa as saying during a Rai radio call-in show.

He added that the government is “studying how to respect the judgement” while respecting the need to maintain the budget.

In December 2011, when the country was under severe market pressure over its public debt, the technocrat government in power at the time pushed through draconian austerity measures.

Among the reforms was a hike in the number of years of pension contributions, a change in the calculation of pensions to take into account salaries received through an entire working life rather than the most recent wages, as well as a halt in inflation-adjusted increases for pensions that are above €1,400 a month.

The then social affairs minister Elsa Fornero had burst into tears when announcing the changes at a press conference.

But in its ruling, the constitutional court overturned the government's decision to scrap inflation-adjusted pension increases, finding that it is a “constitutionally-founded” right which had been “sacrificed in an unreasonable manner”.

The government's representative in court estimated that the savings made from this measure alone amounted to €5 billion for 2012 and 2013, before the subsequent government of Enrico Letta reintroduced a partial reinstatement of inflation adjustments in 2014.

In theory, about six million pensioners now have the right to reclaim payments amounting to an average of about €250 a year.