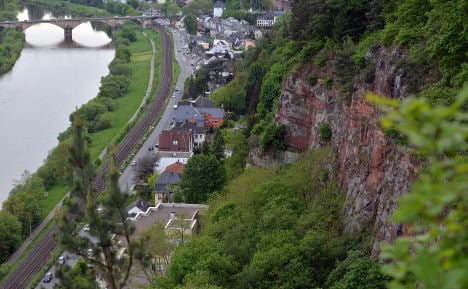 Gräff's body was found under these cliffs in Trier. Photo:DPA

Since the find the police have come in for criticism from Gräff's family for their failure to locate the body in the days after her disappearance.

The site at which forestry workers, who were cutting back thickets, found her remains was a mere kilometre from the place where she was last seen in the early morning of June 7th 2007.

“Why wasn't she found there [during police searches]?” asked the Gräff family's lawyer Detlef Böhm. “It poses the question of how rigorous the police's original search was.”

But the police defended how they had carried out the investigation.

“We didn't have any clues to suggest that she would be found there,” said Christian Soulier, head of the Trier murder commission.

“We had to rely on technology. The area where the body was found is not very accessible,” explained Bernd Michels, who headed the enquiry to T-online.de.

Gräffs skeleton was found, along with her mobile phone and student card in dense thickets below a 50 metre cliff.

In the weeks after the disappearance police had searched the area using climbers, who abseiled down the cliffs, as well heat detecting drones and sniffer dogs.

The search teams themselves were in danger, said Michels. “We were up against the limits of our capabilities.”

Gräff went missing in the early hours of the morning after partying at a summer festival at Trier's Technical College. The disappearance sparked a media frenzy. As police failed to find any trace of the young woman, searches were extended as far as Luxembourg.

Trier police are still treating Gräff's death as a murder enquiry. In response to the body's discovery, they have set up a special investigative team of 20 officers to look at existing evidence in light of the new find.

But that someone else was involved in Gräff's death is still uncertain. It is also possible that she died in an accident or that it was a suicide.

Michels thinks a suicide in improbable. For one, Gräff left no note behind.

Meanwhile an accident is unlikely, argues the Süddeutsche Zeitung (SZ), because a metal fence shields the cliff edge from intrepid walkers.

Furthermore it is believed that Tanja had wanted to meet up with friends after the party in the town centre. The plave where her body was found was in the wrong direction, lying on the wrong side of the Mosul river.

But there is evidence to suggest that Gräff's death was indeed murder. Residents of the neighbourhood in front of the cliffs reported to police at the time that they had heard the sound of a women screaming for help.

For the SZ, the case demonstrates the incompetency of the police.

Key witnesses were only investigated years after the incident, the Munich daily writes.

Furthermore, Gräff's connections to the local death metal scene were not properly investigated, claims a report by journalist Martin Schneider.

On the night of her disappearance, Gräff had been trying to meet up with a young man identified by the name Andreas, who played in a death metal band in a club frequented by the young student.

“Something is still strange,” writes Schneider. “Andreas still played in this band after Gräff disappeared. In a video from one of these bands a young woman can be seen being brutally beaten. [But] Andreas has an alibi for the night in question, that his mobile phone is said to prove.”

Case may never be solved

Whether the case will ever be solved despite the discovery of Gräff's body is open to question.

The police have around 800 leads which could lead them onto the trail of a possible killer.

But Michel, who retired from the police force two years ago, has his doubts.

“I don't think the case will ever be solved,” he told t-online.

The family lawyer Böhm agrees. “It is probably already too late. If they had found the body sooner, it would have been easier to find an explanation for her death,” he said.

But at the least Gräff's mother Waltraud has some form of closure.

“It was a form of relief for her, even if it was initially a shock.” Böhm told RTL. ” She always wanted to be able to bury her with dignity.”