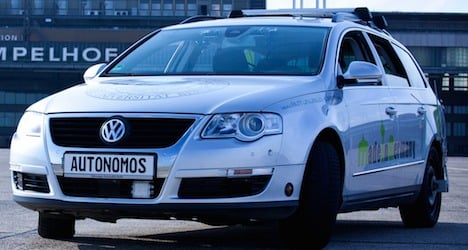 The Volkswagen Passat, which began road tests last week that will end on Thursday, has been equipped with sensors, computers and special software.

“Swisscom is interested in the digitization of the economy,” company official Christian Petit told reporters, showing the vehicle to the press for the first time.

“Swisscom is not turning into a car manufacturer,” Petit said in a statement.

“But future innovations in the automotive industry will centre on networking with the environment,” he said.

“For this reason, the driverless car is a prime example of digitization and therefore of great interest to us,” he said in a statement.

The computer drives, steers and brakes the car and uses laser scanners, radar and video cameras to detect nearby vehicles and pedestrians and road users.

The software is used to issue driving commands and analyse data.

The test Passat has two people in it as a precautionary measure, just in case a driver has to take over.

Driverless cars are being tested in several European countries including Britain and in US cities, including by Internet giant Google.