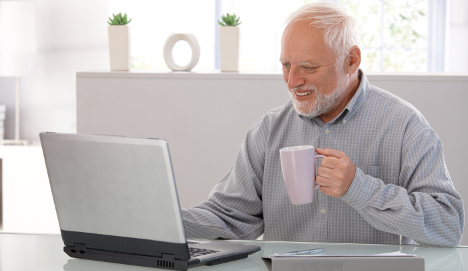 If there were ever an example of the benfits that a good day's work does for one's mind, it is to be found in Helmut Schmidt.

And, despite nearly hitting a century, Schmidt is a sought-after commentator on current affairs widely revered for his insights.

Speaking at a conference in April, Schmidt, who is a famous chain-smoker, told the audience that the secret to a long working life was to have always worked and that “above all one needs cigarettes!”

The conference was organised by the Zeit Stiftung and the Hamburg Chamber of Commerce to look into ways to facilitate extending the working life of Germans, the Hamburger Morgenpost reports.

“In the past people barely experienced their retirement, because they had already died” said Schmidt. “But people are living ever longer. We need to work longer. And we can do it too.

Raising the age of retirement has been a much debated issue in German politics over recent years, as the country with the oldest population in the world (and one of the lowest fertility rates) grapples with how to deal with a bulging number of pensioners and ever fewer young people to replace them.

Now a study by the German Economic Institute in Cologne has shown that more and more Germans are working past the retirement age of 65 anyway.

In the last 10 years the number has increased markedly. In 2005 5.0 percent of Germans over 65 were in employment. That number has now risen to 8.7 percent. That's above the EU average of 8.5 percent, although significantly lower than the 15.5 percent of Britons who decide to keep working into their sunset years.

Dr Wido Geis from the German Economic Institute (IW) in Cologne told The Local that there are three fundamental reasons which explain this phenomenon.

The first is that over the last ten years the job market has become considerably more attractive.

“Joblessness has dropped from around 5 million to three million over the past ten years. This situation has provided continued opportunities for people to keep working beyond 65,” Geis explained.

Secondly, beliefs about what one is still capable of at the age of 65 have also changed.

“People in this age category these days see themselves differently. The idea that there are still opportunities for personal development at this age has become normal,” said Geis.

Lastly, he argued that demographic pressures are creating a need for older people to work further into the years when previous generations were already enjoying retirement.

But the report largely debunks the idea that poverty is the main driving force pushing people to work beyond 65.

Its finding showed that 24.3 percent of 65-74 year-olds with an after-tax income of over €4.500 per month were still in employment.

By contrast, of those with an after-tax income less than €1,100 per month, only 4.9 percent were still in employment.

“We're seeing that working beyond 65 is particularly common among self-employed people. But it is also the case that highly qualified people – professors for example – who still see opportunities for self-fulfilment, stay in employment.

“We've also noticed that one is more likely to keep working when one's partner also remains in employment,” said Geis.

The report also shows clear differences between the German regions.

In Baden-Württemberg it is relatively common to work beyond the retirement agre – 10.5 percent of people take this decision. In Merkenburg Western-Pomerania though only 4.9 percent still work.

This appears to be a result of the very different histories of the two states. Mecklenburg-Western Pomerania, as one of the states of the old German Democratic Republic, is still heavily imbued with a socialist tradition wedded to strict retirement ages in the low sixties. Baden Württemberg has a culture in which small businesses have always thrived. These tend offer more choice and flexibility to employees on issues such as retirement.

'We need a complete change of attitude'

With economists estimating that 50 percent of qualified workers will hit the retirement age over the next fifteen years, it seems clear that Germany needs to readjust its attitude to over-65s in the workplace.

Gleis suggests that more flexible work contracts are key. Laws need to be implemented that enable companies to offer older employees reduced hours contracts – instead over working 40 hours a week, older people could be doing only 15, he suggests.

For ex-Chancellor Schmidt the challenge is also in encouraging people from working class backgrounds to work for longer.

The Zeit Stiftung's work on the issue showed that it is important to recognise strains which are being put on the body early so that they can be treated before they prevent someone from continuing with his job.