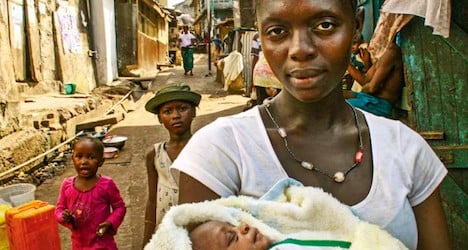 Photo: Save the Children

The Swiss placed 13th in the list released on Monday, with first ranked Norway beating out Finland, which held the top spot last year.

The United States dropped to the 33rd spot in the 16th annual "state of the world's mothers" index, while Somalia is the worst place, just below the Democratic Republic of Congo and the Central African Republic.

The index rates 179 countries based on five indicators related to maternal health, education, income levels and the status of women.

The report points out "large health disparities" between immigrants and Swiss citizens in Switzerland, which drag down the country's overall standard of living for mothers.

"Immigrant women in Switzerland, for example, have a higher risk of mortality than Swiss-born women," it says.

"In contrast, for Italian, Spanish and Turkish-born women in Switzerland the rate was more than four times as high at 12.7 per 100,000 live births."

The report says researchers have attributed this difference in treatment in part "to the fact that language barriers and lack of knowledge of the Swiss health system bar women from accessing prenatal care in a timely manner".

The report noted that the lifetime risk of maternal death overall in Switzerland is one in 12,300, compared to one in 14,900 in Norway.

The overall Swiss mortality rate for children under the age of five is listed as 4.2 per thousand live births, while in Norway the rate is 2.8.

The study found that oil-rich Norway had the world's highest gross national income per capita at $102,610, ahead of Switzerland's $90,760.

As a place for mothers, Switzerland scores below other poorer countries, such as second-ranked Finland, where per capita income of $48,820 is a little more than half of the Swiss income, the report said.

High maternal death risks in US

But Switzerland still ranks as a far better place for mothers than the US, which dropped from number 31 on the list to 33, behind Japan, Poland and Croatia.

American women have a one in 1,800 risk of maternal death, the worst level of risk of any developed country in the world, according to the report.

An American woman is more than ten times as likely to die in childbirth than a Polish woman.

Among the top ten, Australia is the only non-European country, at number nine.

France and Britain take the 23rd and 24th spots, below Canada at number 20.

The ten worst places are mostly sub-Saharan African countries, with Haiti tied with Sierra Leone for the 169th spot.

Nine of the bottom ten countries are wracked by conflict.

The disparity in terms of infant mortality is striking.

In the top ten countries, one mother out of 290 will lose a child before the age of five.

In the bottom ten, that rate stands at one in eight.

The report concludes that the worst places in the world for mothers are urban slums, where a growing proportion of child deaths are occurring.

Save the Children looked at infant mortality rates in the world's 24 wealthiest capital cities and found Washington, DC has the highest rate at 7.9 deaths per 1,000.

By comparison, Stockholm and Oslo has infant mortality rates at or below two deaths per 1,000.

Save the Children CEO Carolyn Miles said the data confirmed that a country's economic wealth is not the sole factor leading to happy mothers, but that policies need to be put in place.

In the case of Norway, "they do have wealth, but they also invest that wealth in things like mothers and children, as a very high priority," Miles said.

Save the Children also reported that mothers are having a tougher time in the world's expanding cities, with survival gaps between rich and poor widening.