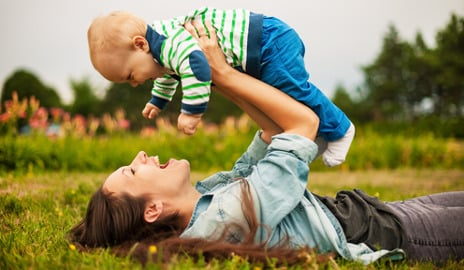 Save the Children's 16th annual Mothers' Index rated 179 countries based on five indicators related to maternal health, education, income levels and the status of women.

Germany ranked eighth place, below Spain and above Australia and Belgium.

The maternal death rate – death during pregnancy or childbirth – in Germany in 2013 was one mother dying in 11,000, while the mortality rate for children under five was 3.9 for every 1,000 live births.

Another factor in the rankings was how long a woman was expected to spend in formal schooling, which was 16.5 years in Germany in 2013.

The ranking also took into consideration the representation of women in parliament. This year, women hold 36.9 percent of seats in Germany, compared to 19.5 percent in the USA and 23.5 percent in the United Kingdom.

Berlin a top city for mothers

Save the Children also looked at infant mortality rates in the world's 24 wealthiest capital cities, with the German capital among the ten best-performing. Berlin placed seventh below Helsinki, Finland and above Copenhagen, Denmark, with an infant mortality rate of about 2.5 deaths per 1,000 live births.
Berlin's infant mortality rate was much lower than the German national average of a little more than three deaths per 1,000 births.
By comparison, the top two cities, Prague and Stockholm, had infant mortality rates below two deaths per 1,000.
The report noted that within Berlin, there have disparities between residents of Turkish origin and those of German origin.
"Recent research shows progress in closing maternal and infant mortality gaps in Berlin," the report stated.
"Berlin residents of Turkish origin (the largest group of immigrant women in Germany) used to have higher rates of infant and maternal mortality than women of German origin. But new studies suggest these outcomes have improved over time."
Still, the report said that research showed immigrant women tended to use prenatal care much less than German women, which could reflect certain obstacles in access to health care that immigrant women face.
The United States' capital of Washington, D.C. had the worst infant mortality rate with 7.9 deaths per 1,000.
Save the Children CEO Carolyn Miles said the data confirmed that a country's economic wealth is not the sole factor leading to happy mothers, but that policies need to be actively put in place to help them.
The report also stated that mothers are having a tougher time in the world's expanding cities, with survival gaps between rich and poor widening.
Cities in Bangladesh, Cambodia, Ghana, India, Kenya, Madagascar, Nigeria, Peru, Rwanda, Vietnam and Zimbabwe have the highest gap for child survival, with poor children three to five times more likely to die than their affluent peers.
Scandinavian countries rank on top for mums
Norway ranked as the world's overall best place to be a mother, well ahead of the United States which dropped to the 33rd spot.
Norway was followed by fellow Nordic countries Finland, Iceland, Denmark and Sweden.
Scandinavian countries have consistently taken the first spots in the Mothers' Index, with Norway this year beating out last year's champion, Finland.
"The report is made in order to show the huge differences between the rich and the poor, and the differences between Scandinavian countries is usually small," Anders Maxon, Media Manager for Save The Children, told The Local.
Among the top ten, Australia was the only non-European country, at number nine.
France and Britain take the 23rd and 24th spot, below Canada at number 20.
Somalia was the worst place, just below the Democratic Republic of Congo and the Central African Republic.
This year, the United States dropped from number 31 on the list to 33, behind Japan, Poland and Croatia.
American women have a one in 1,800 risk of maternal death, the worst level of risk of any developed country in the world, according to the report.
An American woman is more than 10 times as likely to die in childbirth than a Polish woman.
The ten worst places were mainly sub-Saharan African countries, with Haiti tied with Sierra Leone for the 169th spot.
Nine of the bottom ten countries are wracked by conflict, producing a striking disparity in terms of infant mortality.
In the top 10 countries, one mother out of 290 will lose a child before the age of five. In the bottom 10, that rate stands at one in eight.