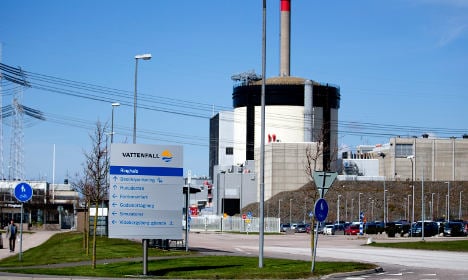 Two nuclear reactors at the Ringhals plant in Sweden are to shut earlier than expected. Photo: Adam Ihse/TT

Vattenfall said reactors 1 and 2 at the Ringhals plant in south-west Sweden were too costly to keep in production until 2025 as previously planned.

“Ringhals 1 and 2 may be closed down between the years 2018 and 2020 instead of, as previously announced, around 2025,” Vattenfall said in a statement.

“The reason is declining profitability and increased costs,” it said.

Sweden has 10 reactors at three nuclear power plants across the country, which generated 39 percent of the electricity used in the country in 2013.

Ringhals reactors 3 and 4 are expected to remain in service until the 2040s.

Vattenfall, which holds 70.4 percent of the Ringhals plant, said it had informed Germany's E.ON, which owns the remaining 29.6 percent, of its decision.

The final closure decision will be made by Ringhals' board of directors and required unanimity between Vattenfall and E.ON.

The Swedish group has been struggling to improve profits for several years, suffering from weak demand and plunging electricity prices.

As the Local reported earlier on Tuesday, the news comes at the same time as the company announced 1,000 job cuts.

“Vattenfall's decision is business driven. It is of course regrettable to close down well-functioning production units but sometimes this is inevitable,” Vattenfall's head of electricity generation, Torbjörn Wahlborg, said in the statement.

The pros and cons of nuclear power have formed part of a long running debate in Sweden. In October, the centre-left coalition government – made up of the Social Democrats and the Greens – agreed to freeze nuclear energy development.

The previous centre-right government had been in favour of expanding the country's nuclear power capacity.