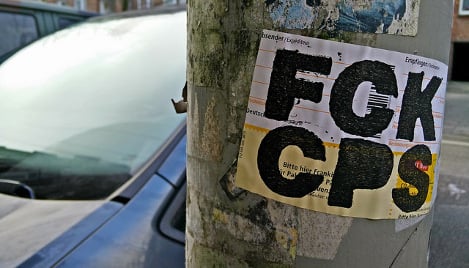 “Displaying the letters 'FCK CPS' in a public space is, due to the basic right to freedom of expression, not in itself punishable,” read the ruling, which judges signed off on unanimously.

A young woman had appealed to the court after being handed a fine when she walked past police while wearing a sticker bearing the inscription. When asked she refused to remove the sticker, reports Die Welt.

A judge ordered her to serve 15 hours of community service as punishment, saying the sticker was an “statement of contempt” and an attempt “to disparage the social value of the affected officials.”

T-Shirts and stickers bearing the inscription are freely available and can for instance be bought on Amazon.

Overturning the ruling, the Constitutional Court said that an insult is only punishable when it is clear that it is aimed at a specific, identifiable group.

General statements of contempt for the police are an expression of a legitimate opinion about the limits of state power, they found.

Utterances of opinion “enjoy constitutional protection, regardless of whether they are deemed baseless or sensible, emotional or rational, valuable or valueless, dangerous or harmless,” read the ruling.

But it allows for interpretation on when an insult is aimed at a specific group. If the insult is seen to be aimed at specific police officers then it would no longer receive constitutional protection.

In the past few years there have been a series of cases of this variety and there is no clear judicial consensus.

In 2014 the state court in Karlsruhe ruled that a banner in a football stadium that read 'ACAB' – an abbreviation of 'all cops are bastards' – was aimed at specific police in the stadium, and was therefore a punishable insult.

This was despite the word 'all' implying an insult against police in general.

A court in Frankfurt went further, ruling that a banner consisting of the numbers '1312' constituted an insult against the police, as the numerals stand for the letters ACAB's position in the alphabet.