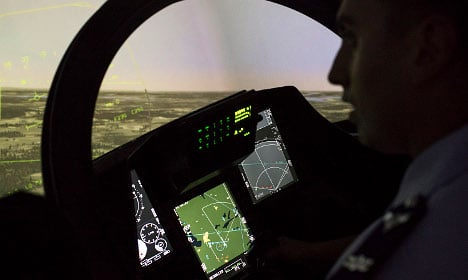 Saab scored an overall C grade based on publicly available information. That score was bumped up to a B when internal information shown to Transparency International was taken into account.

Saab scored its lowest grade in the Personnel and Helplines bracket, which covers whistleblowing. Transparency International gave the Swedish firm a 36-percent score in this category, but this rose to 64 percent when internal information was included.

Saab is one of the world's leading defence and security companies and has around 14,700 staff around the world.

The company recently hit the headlines after it was initially excluded from a major new submarine-building programme in Australia.

The firm reported soaring annual profits in 2014 and forecast stronger arms sales this year in response to conflicts in Ukraine and the Middle East.

It sells the Carl-Gustaf rocket launcher used by US armed forces and this month announced a new multimillion dollar deal to help Norway update its core weapon detection radar system.

The Saab aerospace and defence company is not connected to Saab Automobile.

While 33 percent of the companies reviewed in the last Transparency International report in 2012 showed improvement, two-thirds, or 107 companies, were still rated with below passing grades.

Thirty-seven companies showed no evidence at all of having anti-corruption or ethics programmes.

“Corruption in the defence industry is an issue that we all should be concerned about,” report author Katie Fish told The Local. “It can be wasteful to taxpayers when money could be better spent on healthcare or education, and it can also impact the lives of soldiers when they are handling faulty equipment due to a corrupt deal, soldiers who are defending us.”

Just eight companies showed evidence of having mechanisms that encouraged whistleblower reporting and 13 companies conducted regular due diligence on agents.

In Europe and central Asia, 42 out of 62 received less than a C grade, 27 of which got the lowest grade of F.

Dublin-based Accenture, Airbus in the Netherlands and British Rolls-Royce were among the top-rated in Europe, each scoring a B based on public information and both Accenture and Airbus reaching the A level when internal information provided to Transparency International was considered.

No companies in Europe and central Asia received the top A grade based solely on publicly available information.

“When you look at, say, North America compared to Europe, it looks as if the European companies are more often in the D, E and F bands, but the US is a much larger group,” Fish told The Local.

“It is surprising that UK companies are now in the upper half of the index, and that we do still see companies from Spain, France and German appearing in the lower half. There is still a need for improvement even in western Europe.”

The report also recommends steps that company CEOs, country leaders and investors can take to improve anti-corruption measures, such as having more disclosure of programmes on company websites and conducting independent reviews.

There is no suggestion that any individual company in the report has engaged in corrupt practices.