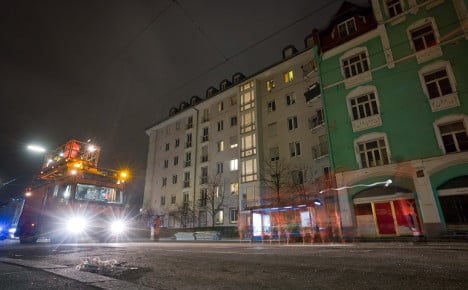 Munich streets in the dead of night. Photo: DPA

Around 3am local a local resident called the police after discovering the little boy roaming the streets without a parent or guardian, the Süddeutsche Zeitung reported. He was barefoot and in tears.

When the police arrived at the scene they immediately wrapped up the youngster in a police uniform jumper, and took him to the station.

Once they had supplied him with some warm milk and a blanket, the police tried to get the little lad to say who his parents were or where he lived.

This task was not an easy one, because in response to the question "What are your parents called?" the little boy unsurprisingly gave the answer "Mum and Dad".

Progress was finally made when he revealed the name of his sister, who police then managed to link back to his parents.

The parents were notified of their son's brief disappearance and rushed immediately to the station to pick him up. They took the lost child in their arms, in what must have been a mix of joy and relief.

It appeared that the little one crawled out of bed in the night, and left the apartment to go for a late-night stroll.

The fact that he wasn’t wearing any shoes when locals found him meant that he probably hadn’t planned to embark upon quite such an adventure.