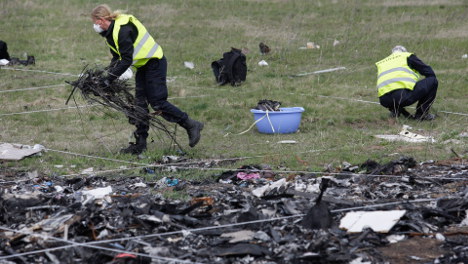 Investigators at the scene of the MH17 crash in eastern Ukraine in mid-April 2015. Photo: DPA

Investigators are still trying to determine who was responsible for downing the Malaysia Airlines Boeing 777 in July last year, killing all 298 passengers and crew on board.

A diplomatic cable from the Foreign Ministry a few days before the crash warned the situation in eastern Ukraine was "worrying," and a military plane was shot down in the same area at more than 6,000 metres altitude, Westdeutsche Rundfunk and Norddeutsche Rundfunk said.

Experts told the broadcasters and the Süddeutsche Zeitung (SZ) that anti-aircraft weapons that can hit aircraft at that height could also reach the much higher altitudes where civilian airliners fly.

It's the first time that the extent of the German government's knowledge of the danger to civilian aircraft from the Ukraine conflict has been made public.

The day of the MH17 crash "three Lufthansa aircraft also flew over the area, including one only 20 minutes before Flight MH17," SZ reported on Monday.

The paper adds that airlines are normally informed of a changing security situation through “communiques” issued by the Transport Ministry.

“We had no information from the authorities before the 17th of July,” German national carrier Lufthansa said.

“If the government has issued us with a 'qualitatively new' warning, Lufthansa would certainly not have continued to fly over eastern Ukraine,” a source inside the airline told SZ.

Ukraine and the West have claimed that separatists shot down the plane using a BUK surface-to-air missile supplied by Russia – a charge denied by Moscow and the rebels, who have in turn blamed Kiev.

Dutch authorities are heading an investigation into the causes of the accident.