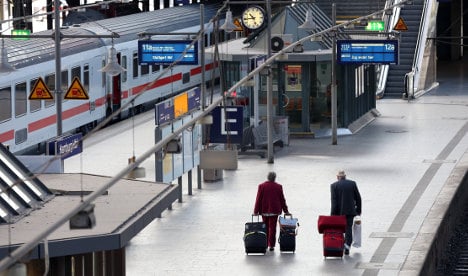 The walkout by members of the German Train Drivers' Union (GDL) is scheduled to last until 9 pm on Thursday for passenger trains, with freight traffic blocked until 9 am on Friday.

Rail operator Deutsche Bahn (DB) said that around one in three long-distance trains would run during the strike.

In western Germany, 60 percent of regional services were expected to run, while the east may see as few as 10 to 15 percent.

DB said early on Thursday morning that replacement services were “running stably” across the country.

While the strike hit S-Bahn and regional services in Bavaria, Hesse and Rhineland-Palatinate hard, Hamburg and Schleswig-Holstein were less badly affected.

The northern states have a larger proportion of train drivers who are public employees and not allowed to go on strike.

Meanwhile, DB will continue negotiations with GDL's rival the Rail and Transport Workers' Union (EVG) in Frankfurt on Thursdsay.

Managers and union representatives have to hammer out an agreement over wages and other points of contention by June 1st – and EVG does not rule out its own strike to get its point across.