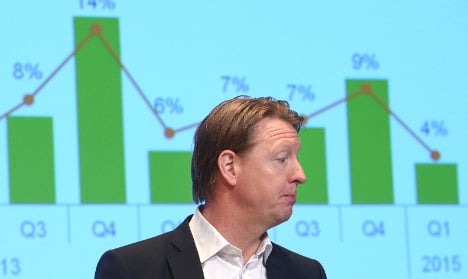 Ericsson's CEO Hans Vestberg pictured last month. Photo: TT
Ericsson, which is the world's leading maker of telecoms equipment, announced a lower than anticipated net profit of 1.32 billion kronor ($151 million) between January and and the end of March 2015.
This compares with a net profit of 2.12 billion kronor in the same period a year ago and a 2.23 billion kronor forecast in an analyst poll by Reuters.
Ericsson shares fell 8.1 percent on Thursday morning following the release of the figures.
The company said that higher operating costs and less spending by US network operators were key factors.
"Business in North America continued to be slow in the quarter as operators remained focused on cash flow optimization in order to finance major acquisitions and spectrum auctions," Ericsson said in a press release on its website.
"Consumer demand and mobile data traffic growth continued to be strong in North America, creating further need for quality and capacity investments. However, with current visibility, we anticipate the fast pace of 4G deployments in Mainland China to continue and the North American mobile broadband business to remain slow in the short term," it added.
The firm's CEO Hans Vestberg told the TT news agency that there was "nothing we think is strange" about the results, adding that he was pleased with the company's growth in Asia, after experiencing its "best first quarter" in India and strong results in the Chinese market.
Telecoms analyst Bengt Nordström told TT: "This result is actually a pretty good reflection of the situation in the telecommunications industry. It is an industry that is not growing."
Ericsson said net sales in the first quarter of the year rose 13 percent to 53.52 billion kronor. This was up from 47.51 billion kronor in the same period a year ago.
Last month the company said it was cutting 2,200 jobs in Sweden, with staff at the company's offices in Stockholm, Katrineholm, Borås, Kumla, Göteborg, Linköping and Karlskrona all affected by the move.
The layoffs are part of a money saving bid to save the firm almost 9 billion kronor ($1 billion) worldwide by 2017.