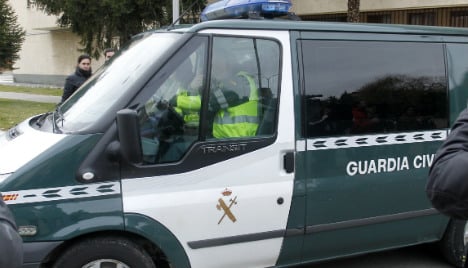 Police have detained a 32-year-old man over the disappearance and possible murder of five women in Majadahonda, a commuter town 16kn northwest if Madrid.

Bruno Fernández who is in police custody has been dubbed the "Majadahonda Ripper" after grisly details have emerged following a search of his home, a chalet in the middle-class neighbourhood.

A Civil Guard team alongside Judicial police and forensics spent all of Monday searching the property in the presence of Fernández who has been remanded into custody.

Police say they discovered a meat grinder on the property, possibly with human remains inside, including what appeared to resemble a human tooth.

The alarm was first raised by the brother of 55-year-old woman from Argentina who had rented a room in the house of Fernández. The brother of Adriana Giogiosa, told police he had been unable to contact his sister who he usually spoke with every day, since the beginning of the month.

Police became suspicious when they questioned Fernández, an unemployed man who has reportedly suffered psychiatric problems and has been sectioned twice before, according to a report in El Mundo.

Police discovered what resembled blood stains in one of the rooms and also a blood-stained knife. They also found that half of the flat had been newly repainted.

Neighbours reported seeing Fernandez behaving strangely when he disposed of plastic bags recently, placing them in different containers. Police are now investigating whether they could have contained the chopped up remains of his victim.

But Civil Guard investigators are also looking into whether Fernandez could be responsible for the disappearance of at least four others.

The house belongs to an aunt of Fernandez who herself has not been seen for years. Fernández claimed that he had “inherited” the property after she was moved to a residential care home. But authorities have no record of her being taken into care.

Police are also investigating whether Fernández could be linked to the disappearance of a prostitute who vanished in the area some time ago, according to El Pais and two others.

Neighbours from a former residence of Fernández have described how he regularly sacrificed live animals in apparent satanic rituals, forcing regular complaints to police, according to a report in Tuesday’s El Mundo.

The 40-year-old was deported to Morocco on Saturday morning after he was held for several weeks at a deportation centre in Barcelona, a police source told AFP.

Officers arrested Mohamed Said Badaoui last month in the northeastern province of Tarragona, where he was the president of the Association for the Defence of the Rights of the Muslim Community.

A Spanish court in late October approved his deportation due to “his participation in activities contrary to national security” and “public order”.

Spanish police consider Badaoui to be “one of the main advocates in Spain of the most orthodox Salafism, which he preaches so influentially that an increase in radicalism occurred in Tarragona” since he moved there, according to its ruling.

Badaoui arrived in Spain at the age of ten from Morocco and has lived in the Catalan city of Reus for 30 years, where he has a wife and three children.

Police also accused him of “taking advantage” of the “vulnerability” of minors who arrive in Spain without their parents, “mainly of Moroccan origin”, to indoctrinate them in the “most radical Salafism,” which promotes a strictly conservative lifestyle.

Badaoui has rejected these accusations. Well-known in Spain’s northeastern region of Catalonia where he has lived for nearly three decades, he presents himself as an activist and anti-racism campaigner.

He has been supported by Catalonia’s main separatist parties which govern the region as well as by the regional branch of far-left party Podemos, the junior partner in Socialist Prime Minister Pedro Sánchez’s coalition government.