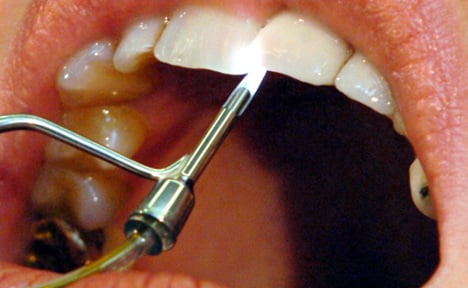 The dentist, referred to only as K. had demanded €50,000 in compensation for the damage done to his reputation by the previous case, the Süddeutsche Zeitung reports.

He claimed that he good good medical grounds to remove the teeth. The patient, Alex S., suffered from chronic osteitis (bone inflammation) and was allergic to fillings, he said.

Over a period of four weeks K. extracted all 19 teeth in Alex S.'s mouth. He charged €2,000 for the operation and claims not to have noticed any psychological problems.

But an independent report found there were no medical grounds for the operation. It noted that the inflammation began after K. had started extracting the teeth and that some of the 19 teeth had no fillings.

Instead, the tooth removal seems to have stemmed from an unfortunate meeting of the patient's psychological illness and the strange spiritual beliefs of the dentist.

S., had been diagnosed with schizophrenia and complained that his teeth were destroying the energy flows in his body. He suffered from erectile dysfunction and hoped that when his teeth were gone he would regain his full virility.

It is likely the dentist believed his patient's theory. On his homepage he claims to develop the “spiritual self-healing capabilities of his patients,” offering “bio-resonance therapy” which he says influences the electromagnetic vibrations of cells.

In a letter to his lawyer K. said S. was an “indigo child” – people seen in esoteric circles as sons of a new era with special spiritual capacities.

“He is not psychotic, he's marvellous,” wrote K., arguing that he healed him by removing his poisonous teeth.

The judge observed that because K. was no normal “village dentist” he probably didn't have the necessary sense for whether S. was sane.

Nonetheless, he should have noticed that his patient “didn't quite tick right.”

S. had been in psychiatric treatment for years and lived in a forest surviving off raw food, he noted.

In his defence the dentist argued that “there was nothing notable about [the patient].”

But this statement seems to contradict the letter to his lawyer in which he wrote that S. “was clearly off his head”.

After a short discussion with his lawyer K agreed. He will also have to pay for the costs of further treatment that S. requires for implants.

K. did not seem disturbed by the proceedings, which he sat through with a blissful smile on his face.

Later he said that he wants to give up dentistry and work full time on researching the vibrations of the body's cells.