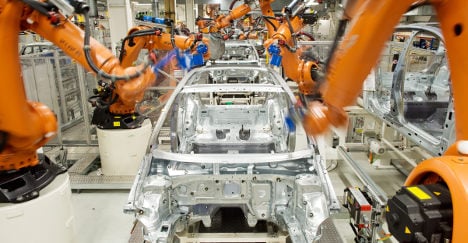 The forecast by four research institutes was sharply higher than the 1.2 percent growth for 2015 they had predicted last autumn.

"The low oil price leaves the Germans more money for consumption, and the low euro is pushing exports," said Timo Wollmershäuser, chief economist at the Ifo Institute, which took the lead this year in writing the annual spring forecast.

The joint paper said that while "consumer spending is the pillar of the upswing", Germany also benefited from "positive impulses from the rest of the euro area, so that foreign trade is contributing to the expansion".

For 2016, the institutes predicted 1.8 percent growth in Germany's gross domestic product (GDP), as the positive effects of low energy prices gradually wear off.

The report comes ahead of the government's official forecast to be released next Wednesday by Vice Chancellor and Economy Minister Sigmar Gabriel, which is also expected to be higher.

The German government had in January predicted 1.5 percent GDP growth for the year, after 1.6 percent in 2014.

The more upbeat forecast comes after the European Central Bank this year launched a massive 1.1-trillion-euro bond buying programme to stimulate the eurozone economy, and as the euro common currency has fallen, making exports more competitive.

The German economic research institutes in their report also predicted that the unemployment rate, already among Europe's lowest, will drop to 6.3 percent in 2015, from 6.7 percent last year, and decline further next year to 5.9 percent.

The researchers expect currently low consumer price inflation to rise only slightly to 0.5 percent this year and to 1.3 percent next year.

The current account surplus of the European export power will continue to rise to a new record €256 billion, or 8.5 percent of annual economic output, they predicted.

The institutes also forecast healthy government finances, with a public surplus of €21 billion this year, up from €18 billion in 2014.
Next year, the public surplus is projected to increase to nearly €26 billion, they said.