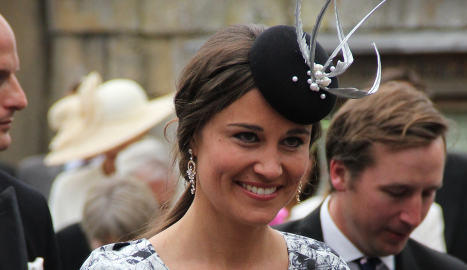 Pippa Middleton at the wedding of Lady Melissa Percy in 2013. Photo: MatthewSlack/Wikimedia Commons
Pippa Middleton, 31, consumed the controversial starter while staying in a “designer pod” at the 1,950 kroner a night Juvet Landscape Hotel on Norway’s River Valdolla.
“We dined on smoked whale carpaccio (which tastes similar to smoked salmon but looks more like venison carpaccio),” she wrote in a feature article published in the UK’s Daily Telegraph newspaper.
The dish was cooked for her personally by hotel owner Knut Slinning, in what she described as “a wonderfully convivial atmosphere”.
Siri Martinsen, the head of Norwegian animal rights group NOAH, accused Middleton of failing to live up to her responsibilities as a public figure.
“Being a well-known celebrity, she has  special responsibility to make sure she doesn’t support animal cruelty, so it’s a bit sad that she hasn’t taken the animal welfare consequences into consideration.”
She pointed out that the declining appetite for whale meat among Norwegians meant that the whaling industry was increasingly marketing its product to tourists.
“It would be a pity if this was seen as a sort of 'exotic meat'. About 20 percent of the whales die quite a slow death, so there's a good chance that the whale you are eating has suffered substantially. I would encourage any tourist going to Norway to avoid supporting activities which are cruel for animals.”
Middleton first came to the British media's attention at the wedding of her sister Kate to Prince William, the second in line to the British throne. She has since worked as a public relations consultant, columnist and journalist.
Norway broke the international moratorium on commercial whaling in 1993, and last year caught 729 whales, the highest number since it began the slaughter.
In her trip Pippa Middleton began in the port of Ålesund, taking a boat to the Sunnmore Alps, where she spent several days Nordic skiing.
“Nothing beats a Scandi breakfast,” she exclaims in the article, praising the “healthy mixture of rollmop herrings, delicious smoked salmon, rye bread, cucumber with eggs, and a fresh coffee .”
During her ski tour, she knocks back Aquavit and when she gets back to Alesund, she dons a fisherman’s onesie and catches a large flabby cod.
Prince William visited Norway in 2004 while on a geography field trip from St Andrew's, the Scottish university where he met Kate.