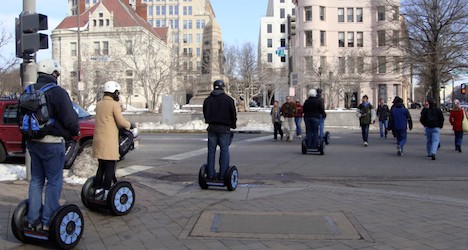 The decision was announced on Wednesday by the federal government in a move to broaden the use of lanes previously reserved for bicycles in the wake of technological innovations.

The Segway, a two-wheeled self-balancing vehicle powered by a battery, is technically banned from bike lanes as bureaucrats in Bern struggled to classify such vehicles.

The so-called public transporter, which can travel at up to 20 kilometres an hour, is banned from roads and pavements in the UK, while a patchwork of regulations governs their use elsewhere in Europe.

In Switzerland, Segways will be treated like other electrically assisted vehicles, such as e-bikes, electric bike taxis and even self-balancing devices with single wheels that have a top speed of no more than 25 kilometres an hour.

Under the regulations taking effect on June 1st, they will be authorized for operation by users 14 years and older with a driver’s permit for mopeds and 16 and older for those without such a permit, the federal roads office said.

Electric bike taxis will be authorized for use on bike lanes, provided they are not more than a metre wide, the office said.

Permitted users will be required to have either a driver’s permit for motorbikes, one for cars or one for vehicles restricted to a maximum speed of 45 kilometres an hour (F permit).

The new regulations will also clarify regulations for motorized wheelchairs, which can already be used on Swiss pavements, to ensure that they are only used by people with disabilities.