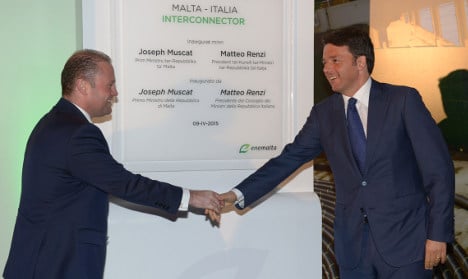 Italian premier Matteo Renzi (R) and his Maltese counterpart Joseph Muscat at the launch of the Malta-Sicily interconnector project on Thursday.Photo: Matthew Mirabelli/AFP

The European Union's smallest island member state has depended until now on two power stations, with problems at either of them causing blackouts and widespread disruption, including at the country's airport.

The cable runs to Sicily, where it joins the Italian power network at the Terna substation in Ragusa.

The project, launched in 2012, was part-financed through the EU's European Energy Programme for Recovery (EEPR).

Malta last went dark in August 2014 when the island lost power for 18 hours after an explosion at one of the power stations.

The second station picked up the slack but was quickly overloaded by demand and power was lost across the board, including at the island's only airport, forcing the diversion of flights.

Cyprus, which like Malta depends on its power stations for the generation of electricity, was without power for days in 2012 after a problem at one of its power plants resulted in the entire grid shutting down.