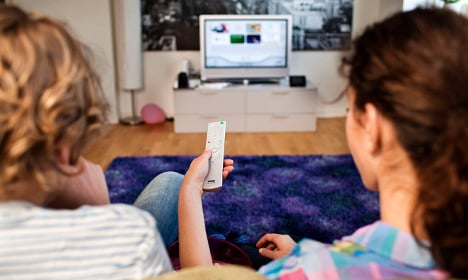 A couple watching Telia. Photo: TT
Telia announced the news in a press release and apologized to customers for the "mess" they had been forced to experience as a result of the dispute, with European broadcaster SBS, which sells channel packages to the Nordic firm.
The row led to several television networks being pulled by Telia.
The company said in its statement that forcing viewers to go without their favourite channels was "the last thing we wanted".
"Since late last night, we happily have a new agreement with SBS Discovery, which means that we from now on be able to offer channels Animal Planet, Discovery, Eurosport, Kanal 5, Kanal 9, Kanal 11 and TLC. In addition, Investigation Discovery will be available shortly," the firm added.
Around 700,000 households that subscribe to Nordic telecoms giant Telia’s television packages were affected by the row which saw the channels disappear, with some briefly replaced by alternatives including Fox, National Geographic and Nat Geo Wild.
Viewers unhappy with the arrangement were able to cancel their subscriptions without a fee.
But the company was inundated with complaints from people angry about missing their top TV shows as well as sporting events such as the Tour of Flanders cycling race in Belgium over the weekend.
Telia said that all customers should see the missing channels return by Wednesday night and that the replacement channels would remain available throughout April.
It also announced that a catch-up function would soon be made available and that it was expanding its movie collection.
The hashtag #Telia was trending on Wednesday morning as viewers turned to social media to discuss the news.