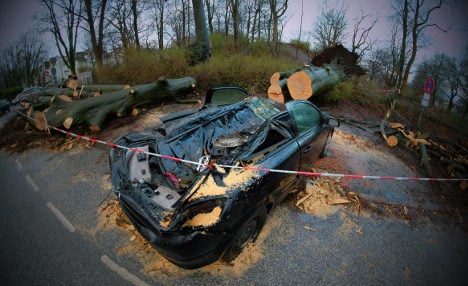 With wind strength of 193 km/h Storm Niklas, which battered Germany for most of Tuesday, was one of the strongest to hit the country in years.

The victims of the storm were mainly in the south.

In Bavaria and Rhineland-Palatinate a woman and two men were killed by trees falling onto their cars.

One man in Bavaria died in strong hail on the A95. In Baden Württemberg, two men died on a snow covered road.

In the east of the country there were also casualties.

In Saxony-Anhalt, a man died when a concrete wall collapsed onto him.

In Weimar a 9-year-old girl was severely wounded when a tree fell on her. The tree also injured her mother and sister.

On the streets and motorways, toppled over lorries brought traffic to a halt. The police and fire services were in constant action.

Airlines are warning that flight delays will stretch into Wednesday.

Rail operator Deutsche Bahn (DB) worked throughout the night on Tuesday to repair overhead cables. But delays are still expected on the Munich to Salzburg line and between Bremen and Hannover.

“The hurricane hit our rail lines with full force,” said spokesperson Achim Stauß. “It is important that we have everything sorted again from Thursday on in preparation for Easter.”

DB offers further information on delays on its website. 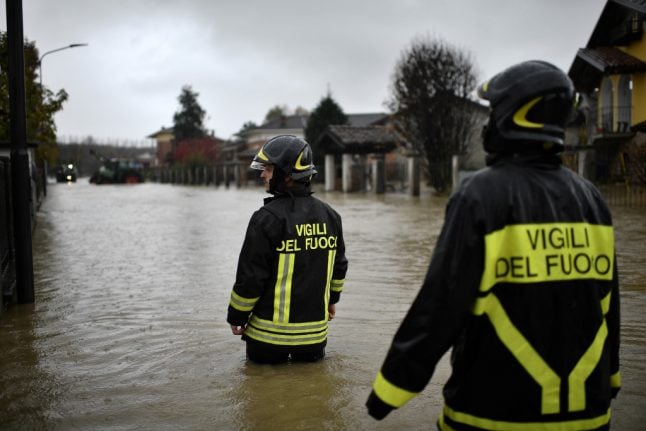 Severe weather has been reported over the weekend everywhere  from South Tyrol down to the central region of Lazio around Rome, with at least four people killed in two separate incidents, and several reported missing.

In Tuscany, two girls aged three and 14 were reportedly killed on Saturday night when a tornado reportedly uprooted a tree which hit their tent at a campsite in Marina di Massa.

Two German tourists were killed on Sunday night during severe flooding on the Brenner state road near Bolzano, South Tyrol, the Ansa news agency reports. A family car collided with a lorry, killing two of the passengers; a 45-year-old father and 67-year-old grandmother. A seven-year-old boy and his grandfather reportedly survived, while the lorry driver was unhurt.

The vehicles had been diverted onto the local road when the motorway was closed due to storms. The motorway has now reopened on Monday, however train lines in the area remain closed.

A 38-year-old man has been reported missing in the Varese area after being swept away by a swollen river.

The city of Verona is bracing for further flooding after being hit by multiple waves of bad weather since August 23rd, with high winds and giant hailstones also causing considerable damage in the area.

Severe damage was reported across much of the Veneto region, with the Vicenza and Belluno areas also hit particularly hard. The famed ski resort of Cortina d'Ampezzo in Belluno suffered landslides due to strong winds and heavy rain.

We’re so not used to this weather! ? #ClimateChange #trombadaria #Verona pic.twitter.com/glIX72db1J

In the Vicenza area of Veneto a tromba d'aria (small tornado) flattened trees, fences and road signs and damaged buildings.

The bad weather reached neighbouring Lombardy with hailstones “the size of eggs” reported in Cremona and Mantova, and heavy rain and flooding in Alessandria.

And in Bergamo, firefighters had to clear roads made impassable by severe hail.

Meanwhile in parts of the south, fire crews have been battling blazes in woods and scrubland from southern Tuscany and Marche to Sicily after a hot, dry summer.
Italy's Civl Protection department continued to issue weather warnings on Monday with orange (level two) alerts in place for Veneto, Trentino Alto Adige and Lazio.