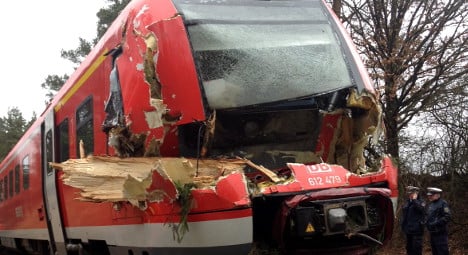 This train in Lower Saxony had to stop after striking a fallen tree. Photo: DPA

According to Saxony-Anhalt police, a man near Magdeburg in eastern Germany was killed by a concrete wall blown over by the stormy winds.

The man attempted to stop the wall from rocking in the storm, but a violent gust of wind pushed the wall over and crushed him, police said.

Two road maintenance workers were also killed when a tree fell onto their car in the western state of Rhineland-Palatinate between Dies und Hübingen, near Montabaur. Police confirmed to The Local that deaths were a result of storm Niklas.

The police said they would release more specific details later.

Regional trains have been cancelled in North Rhine-Westphalia since 11 am, while Lower Saxony and Bavaria have seen rail service completely wiped out on Tuesday afternoon.

Munich's main train station was evacuated after glass pieces fell from the ceiling.

There were also delays and disruption to long-distance services and the ICE train line between Munich and Augsburg was closed.

At Frankfurt airport, a total of 150 arrivals and departures had been cancelled and many other flights were delayed.

And it appeared that some planes preferred not to risk a landing at Hamburg airport and were diverting Hannover.

Some areas in south-western Germany also lost power completely, while many wind turbines had to be switched off to avoid producing too much power.

Other areas affected include Oberschwaben, Linzgau, Schwäbisch Hall and Hohenlohe in Baden-Württemburg, and the Allgäu region in Bavaria.

But meteorologist Lars Kirchhübel from the German Weather Service (DWD) told Bild on Tuesday afternoon that the high winds were easing off in the west of the country as the storm moves northeast overnight.

How about something nice? Blue sky and sunshine after the storm #niklas pic.twitter.com/ec8ACuFsMD

He added that it was one of the strongest storms of recent years, with gusts of up to 150 km/h.

One gust at the top of the Zugspitze, Germany's highest mountain, was measured at 192 km/h.