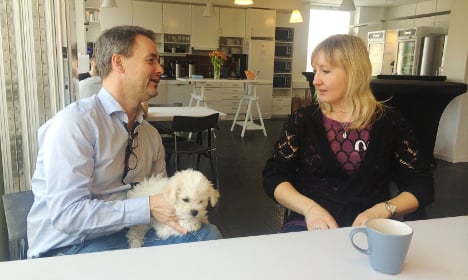 Magnus Melander and Linda Krondahl of THINGS. Photo: The Local

“We only got access to the building in November and the first company moved in in the middle of January. It's amazing how far we've got in so little time,” says CEO Linda Krondahl when we start the tour.

There are still bits of scrap plywood and cardboard boxes lying around (Krondahl promises all will be tidied up and ready in time for the grand opening on Thursday night with around 400 guests invited), but the building is already a bustling hub of activity. People are hunched over laptops in open-plan work spaces, talking animatedly to each other in the corridors and having intense briefs in the meeting rooms.

“It's great to see that they're already hard at work,” comments Magnus Melander, one of the board members and the main point-of-contact for external relations (his job title is 'Evangelist'), who spends the entire interview carrying his new Bichon Frisé puppy around on his arm.

“The dog suits you,” says Jakob Johansson, the CEO of Gleechi, an up-and-coming firm which uses software technology to create realistic hand animation for computer games. We run into him in the kitchen, where several other tenants are chatting to each other over cups of coffee.

Magnus tells him he held a forty-minute presentation in front of 150 people the other day with the puppy asleep on his arm. THINGS is located on the campus of KTH in Stockholm. Photo: The Local

Global companies like Minecraft, Spotify and Skype all found their feet on the Swedish start-up scene. And the idea of THINGS is that one of the stars of tomorrow could be hiding inside this 2,000 square metre house on the campus of KTH (Royal Institute of Technology) in Stockholm, specially customized to bring together start-ups and industry partners, including Swedish banking giant SEB, Husqvarna, Cisco and ABB.

“We've got 150 office spaces here that the start-ups can rent, 15 small meeting rooms, one conference room, telephone booths. Half of the office spaces are what we call 'co-work' spaces, where you sit in an open-plan environment with a different start-up next to you at the table,” says Linda. Joacim Westlund, co-founder and CEO of Shortcut Labs, is one of the names behind 'Flic', a wireless smart button that allows you to connect to your smart phone and perform any function just by clicking it, be it a shortcut to help you locate your mobile phone if you lose it or get your stereo to play the perfect Spotify list for your date.

After recently collecting more than $750,000 in an impressive crowd funding campaign, the small firm has already received 10,000 orders, set to be delivered in April.

“We were interested in renting a place here as soon as we found out about it. We've already established dialogues with a lot of the other companies here, like Moggels and Volumental,” he says.

It was the hardware aspect that drew him and his partners to THINGS. And an obstacle often faced by smaller start-ups is the lack of funding and expertise in physically creating a prototype of their product, explains Linda.

“We've got a film studio and a workshop with printers and a soldering station where the tenants can put things together. Giving them access to this helps them to test their ideas in practical terms,” she says.

“All the companies here have similar hardware issues, so you can help each other,” adds Joacim. Miroslav Kobetski showing how the 3D scanner creates a perfect copy of his feet. Photo: The Local

He's not alone in his thoughts. Miroslav Kobetski, co-founder of Volumental, demonstrates how their 3D scanner can build an accurate model of body parts to help customers find their perfect, personalized clothes. He says: “It's great being close to other start-ups. We were the first ones to move in, but it's getting really dynamic now when more start-ups are arriving.”

Unlike some of the smaller companies in the building, Volumental has already made its mark on the start-up scene. Since its birth in December 2012 it has grown from four founders to a team of 16 people from seven countries. So how long are they allowed to stay at THINGS?

“No more than 18 months, but that goes for everyone. We need to optimize this building to keep this dynamic atmosphere,” says Magnus.

“You're also not allowed to have more than 20 people from the same start-up. But the main criterion is that the companies have to be active and extrovert and willing to share their ideas with each other – that's the point of THINGS.”

Linda adds that it is important that they get the mix of larger partner companies and start-ups right. And although it is business incubator STING (Stockholm Innovation and Growth) that's behind the project, there will be no hand holding.

“THINGS is not an incubator. We don't do any coaching," she says and then adding, as an afterthought: "Except for the discussions that happen by accident at the coffee machine!”

What is THINGS? It's Sweden's first hardware co-working space, located at KTH in Stockholm.

Okay, but what does that mean? It means that it provides a space for start-ups and larger branch organizations to meet and exchange experiences. And there's a workshop for the start-ups, which largely work with software, to create their physical hardware material.

Can I rent a space? Sure. Well, we obviously can't promise anything, but if you've got a great start-up plan and are willing to share your ideas with other companies, go for it. Renting a space costs up to 3,000 kronor a month.

Who started THINGS? Pär Hedberg, CEO of STING, came up with the idea a year ago. Then Magnus Melander and Linda Krondahl got involved and together they have created this space, which opens on Thursday.

And what's STING? It's a so called 'incubator', which helps people turn their ideas into businesses by providing access to funding, key contacts and coaching.