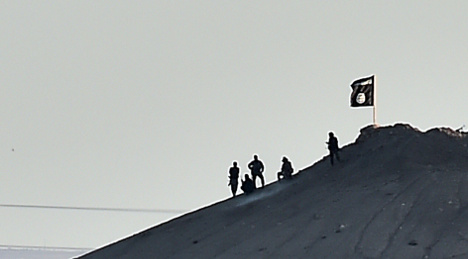 Alleged Isis militants stand next to an Isis flag atop a hill in the Syrian town of Ain al-Arab. Photo: Aris Messinis/AFP

The three were allegedly part of a militant cell that operated between Italy and the Balkans, Il Fatto Quotidiano reported.

The two suspected Isis recruiters are Albanian nationals. One was arrested in Turin and the other in Albania, the newspaper said.

An Italian of Moroccan origin, who investigators claim is the author of the Italian version of a 64-page Isis propaganda document that recently appeared online, was also arrested in Turin.

The two Albanians, said to be an uncle and his nephew, had allegedly found a would-be jihadist living in Como who they were preparing to send to Syria, Il Fatto reported.

The arrests come a week after a 30-year-old man from Pakistan was arrested in Brescia over alleged links to a terrorist network. He was deported last Thursday.

Anti-terrorism chief Mario Papa told parliament last week that 17 arrests and 33 expulsion orders had been made since the terror attacks on Paris in early January.

Italy's cabinet in February approved a slew of anti-terrorism measures, including jail terms of up to six years for "foreign fighters" as well as those who recruit would-be jihadists.