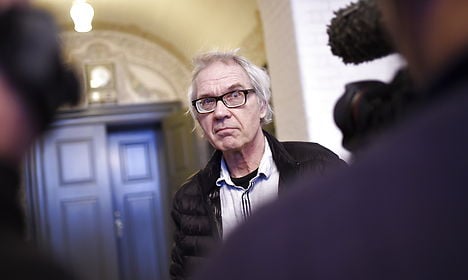 Vilks was back in Copenhagen earlier this month. Photo: David Leth Williams/Scanpix
Lars Vilks, who has been in hiding since the attacks in Denmark, says he has been moved between three different locations and was told by Swedish police this week that he could not go back to his house in Höganäs in southern Sweden.
After being briefly allowed to collect some belongings several weeks ago, police supervised as a removal company packed up the rest of his possessions on Tuesday afternoon.
"Police did not want me to be there, they watched as everything I had there was moved. I had to make some quick decisions about the stuff I wanted to keep," he told The Local's team in Stockholm on Wednesday.
"I am still living in hiding. No one really knows what they [the police] are planning and discussing. They haven't found a solution. They want to put me in a place where it is safe to keep me for a long time. My last house was very close to the road and you could reach it too quickly or get away. You would have needed a whole army there," he added.
See also: Who is Lars Vilks?
The 68-year-old cartoonist, who whipped up an outcry across the Muslim world with his 2007 sketch of the Prophet Muhammad as a dog, was already living under police protection before the shootings in Copenhagen in February. Vilks was among those attending the event at a cultural centre that was attacked.
He returned to the city earlier this month to receive a prize from the Danish Free Press Society, but has otherwise rarely been seen in public and several talks and discussions he was due to attend have been cancelled.
Asked about whether he felt his own rights were being restricted as he sought to promote freedom of expression, he said: "I am getting used to it because the most important thing for me is that I have the possibility to do my work and I do have a mini studio [where I am living] where I can do paintings and drawings."
He said he was disappointed that "no one dares" to exhibit his current sketches and paintings, but pleased that he could make them available online. The Danish Free Press Society is currently selling his controversial Muhammad piece.
Five men have now been arrested in connection with the twin Copenhagen shootings at a cultural centre and Jewish building that left two people dead.
Url copied to clipboard!