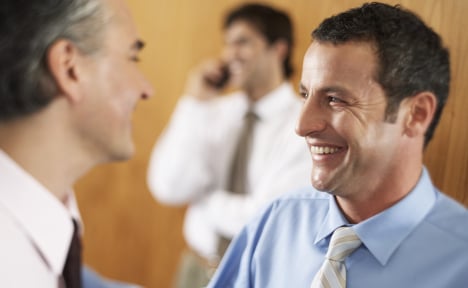 The Ifo institute's closely watched business climate index rose to 107.9 points this month, its highest level since July 2014, the think tank said in a statement.

It was the fifth consecutive monthly increase and was better than analysts had been expecting.

Dr. Jens Boysen-Hogrefe deputy director of the forecasting centre at the Kiel Institute for the World Economy told The Local that “the export economy is seeing a gentle improvement, especially due to the recovery in the euro area and the dip in the exchange rate vis a vis the US dollar.”

For Germany's heavily export-oriented economy this is a key factor in improving business confidence, he said.

Boysen-Hogrefe also named low interest rates and the sustained fall in the price of oil as contributors to the more optimistic outlook.

But he warned against over-optimism, cautioning that “while the billed boom sounds good” it could lead to an “overheating” of the German economy and “threatens to bring a recession in its wake.”

The expert also expressed concern that the minimum wage and rises in state pensions enacted in the economic good times will become a burden when boom turns to bust.

Ifo calculates its headline index on the basis of companies' assessments of current business and the outlook for the next six months.

The sub-index measuring current business rose to 112.0 points from 111.3 points, while the outlook sub-index increased by 1.4 points to 103.9 points, the institute said.

Analysts said the Ifo reading confirms that the German economy is already shrugging off the geopolitical uncertainty that depressed sentiment last month.

"Companies are shaking off worries about Russia and Greece, which had been weighing on optimism in February," said Berenberg Bank economist Christian Schulz.

"Further improvements in Germany's momentum are ahead. The economic tailwinds of cheap oil and a weaker euro take time to feed through to companies' and households' purchasing and investment decisions," Schulz said.

The Ifo index is still a long way from reflecting a real "boom", "but the upswing is broad-based," the expert noted.

German business confidence "has clearly left behind its lull in mid-2014, strengthening the case for optimism about Germany's growth prospects," he said.

Postbank economist Heinrich Bayer said the rise in the Ifo index offered a "clear signal that the economy upturn will continue in the coming two quarters."

"Strong growth in the fourth quarter of 2014, combined with low energy prices and the weak euro exchange rate, have boosted confidence in the economy."

"The economy is like a sailboat which only needs to hoist the sail and lean back to relax. Strong tailwinds could bring the strongest economic performance since 2011," he said.