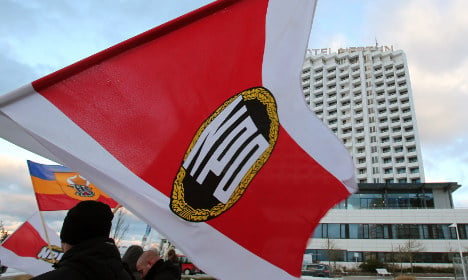 The process against the NPD, taken to the court by interior ministers of the federal states, is built upon a collection of data and citations gathered from within the party which are said to prove the likeness of its ideology to that of the Nazi party.

A previous attempt to ban the party ended in failure in 2003 when it was revealed that many of the party's top officials were secretly agents of the German intelligence services, paid by the government.

The Constitutional Court based its decision to uphold the party's legal status on the fact that the influence of the intelligence services and their informants on party ideology could not be disentangled from the party's own position.

The 2003 court decision was a major embarrassment for the German political establishment.

The fear is that the current process could collapse for similar reasons. The state interior ministers have previously announced that all informants were withdrawn from the party before the collection of evidence began.

CSU interior expert Stefan Mayer reacted angrily to the decision, telling the Passauer Neue Presse that “the federal states can in no way be accused of not having provided a sufficient amount of proof.”

Green Party head Kathrin Göring-Eckardt saw Monday's ruling as an “alarm signal” for the possible collapse of the process.

“Memories will be stirred,” she told Die Welt. “This [ruling] confirms our scepticism about the whole process.”

The process seeks to prove that the NPD contravene Article 21, Paragraph 2 of the German constitution, which states that political parties which “tarnish the free and democratic nature of the republic” violate the constitution.